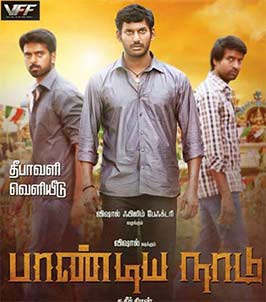 A grieving father conceals his happiness with an awkward smile when he comes to learn that the man responsible for his son's death is dead too. He silently walks into his room, breathes a sigh of relief and picks up his crying grandson and takes a stroll.

This is one of the most powerful scenes of "Pandiya Naadu", which unarguably is a better film compared to other two Diwali releases. It's a quintessential revenge drama supported by taut narration and wonderful performances.

Director Suseenthiran is known for his action flicks, and "Pandiya Naadu" is an actioner too, but it also has this genuine touching family angle included with a purpose. He cashes in on a strong family bond to narrate an engaging revenge story sans any commercial cliches.

When the local don of Madurai kicks the bucket, war ensues between his two brothers for the position he has left behind. It's just a matter of time when one of the remaining brothers, Sharath Lohitashwa, emerges victorious in the battle to take over the empire.

Sharath runs several illegal businesses in the city and when an accident in his granite mining factory is leaked to media by a local government officer, he kills him. To avenge the death of the officer, his younger brother (Vishal) and father (Bharathiraja) set out to kill Sharath.

"Pandiya Naadu" has a very ordinary first half with a lot of focus on family drama and romance, but it takes a detour post-interval to give audiences an engaging climax.

It steers away stereotypes and entertains with a very strong screenplay, while strong performances by the lead cast make the film one of the best in this genre.

The film is a winner because of Suseenthiran, who knows exactly how to use his craft and never let goes off an opportunity to pleasantly surprise the audience.

He did it recently with "Aadhalal Kadhal Seiveer" and now repeated it with "Pandiya Naadu", which gives us a much needed face life to the genre. I loved the fact that he used the family tie to never strip the film off its emotional quotient, but use it poignantly to build an edge-of-the-seat narrative. Brilliant!

For the first time in his career Vishal has shed his action hero avatar, and it worked in his favour. To see a commercial actor sans heroism is a rarity in Tamil cinema nowadays, but Vishal stood by the change, which was the need of the hour. It was a welcome relief and helped audiences to instantly connect with his character in particular.

Veteran filmmaker Bharathiraja as the father is brilliant and his subtle relationship with Vishal stands out. He gives a knockout performance that makes you root for the actor in him.

Vikranth makes a comeback with an impressive cameo, but wish we got to see more of him.

The amateurish style action is appropriate, much better than most exaggerated action sequences in several Tamil films.

Madhie's cinematography is top class especially during the chase sequences, while Imman's tunes and background score was satisfying.

This festival weekend "Pandiya Naadu" is your best bet at the cinemas. It's a dark horse that gallops with pride.