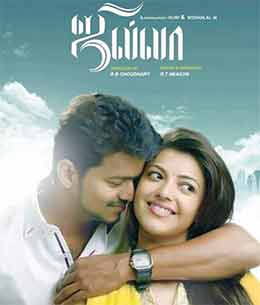 What do you expect when two superstars, Mohanlal and Vijay, are pitted against each other in a film where they play a father and son? Fireworks! There's plenty of it in "Jilla", and lots of commercial elements aimed at appealing to every fan of the superstars. But the film doesn't have an engaging screenplay to keep you hooked for three long hours and that's precisely why it's an exercise in futility.

The 10 steps approach followed by the makers of "Jilla" are as follows.

Step 1: Two superstars are cast. In order to give them equal screen presence, it's made into a three-hour long film (let's not forget 15-20 minutes of interval). Both the superstars have a grand introduction scene that eventually leads to a fight. This is usually followed by a song.

Step 2: Throw the spotlight on one of the superstars in the first half, while the other gets his share in the second half. Is this needed? In order to satisfy the large following of these actors, it's very much needed. Lastly, throw in a song featuring them.

Step 3: Superstars in Tamil cinema should either be from an affluent family or belong to a deprived one. Therefore, we have a rich superstar as well as a poor one. Since the economic divide between them may upset the fans, they are quickly brought together under one roof. All are happy.

Step 4: We also like to make fun of the state constituted bodies such as police in our films. This is why one of the characters abhors police and doesn't hesitate to beat the living daylights at the very sight of them. He treats women police the same way and we don't have a problem with that because he's the hero and nobody can raise a question.

Step 5: A superstar needs an extremely good looking heroine. We have a young and talented actress, who gets subject to stalking and public humiliation throughout the film, but yet is made to fall in love with our hero. It's perfectly alright how we treat our heroines on screen because we don't care what kind of effect it can have on the audience.

Steps 6: Our superstars can become a multi-millionaire from a pauper in just one song. It's definitely possible and the same is applied here. One of the superstars directly becomes the Assistant Commissioner of police and on his first day at work, he makes fun of his co-policemen about their fitness.

Step 7: When cast opposite a superstar, our comedians are usually made to become a laughing stock. It's not at the jokes of the comedians we laugh, but it's at the way they are treated in our films. It shouldn't be confused with slapstick comedy because we laugh out of sympathy for them.

Step 8: Superstars are made of steel, and, therefore, it's alright to make them come out alive of a car crash. This explains why in one of the scenes our superstar walks out with a small scratch after his car gets hit by a speeding lorry.

Step 9: A film featuring superstars needs to have good music too. But we don't care if the songs break the narrative of the film because the audience has already paid for it. If we are making a three-hour long film then we may as well have five songs.

Step 10: The superstars had a grand entry and they deserve a good finish too. Therefore, they are made to team up and fight in the climax and the response from the audience is phenomenal. This is followed by a 'moral of the story' moment.