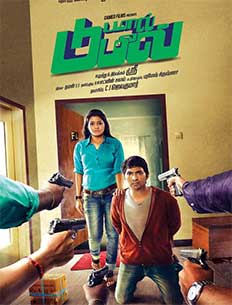 Close in the footsteps of dark comedies such as "Soodhu Kavvum" and "Moodar Koodam", comes "Damaal Dumeel", which unlike its contemporaries, may not be exceptional but still has what it takes to be applauded for the effort.

The film is based on a series of accidents that pave the way to humour at regular intervals. Each of these accidents is interconnected and the film explains why one accident leads to another and another and so on until there's one last accident in the climax.

The series of accidents start when a box full of money is wrongly delivered to Moneykandan (our hero who is a firm believer of numerology), who has just lost his high-paying IT job, with his sister's wedding in the offing.

Why was the box delivered to Moneykandan in the first place? Actually, the box was supposed to be delivered to someone in flat number F6, but it gets delivered to E6 (after a cricket ball hits the E and it breaks and become an F). That's our first accident. When two men come searching for the box and break into Money's house, it leads to the second accident. The third accident happens when two more men come searching for the first two men. One accident leads to another and it eventually leads to one big accident in the climax.

I haven't seen a better Tamil film in the recent past that managed to use a single point of reference (the accidents) so effectively to narrate a story. Even though it doesn't have an impressive story, it manages to keep us hooked with its quirky narration, at least partly. It is engaging because it's as short (118 mins) as its contemporaries (all recent dark comedies in Tamil were under two hours), and therefore, never leaves room for a dull moment and even when you feel one, it's gone even before you realize it.

There's not a single unwanted scene in the film. We keep hearing and seeing the hero's mobile phone ringing every now and then, but it is not until the climax we appreciate its importance in the story, especially its ringtone which leads to the final accident.

Similarly, we also randomly see children playing cricket in a scene and we realize the significance of this scene when the cricket ball sets in motion the series of accidents. Here's where you want to appreciate director Shree, who, I agree may not have delivered an outstanding film, but has proved the difference young filmmakers like him can bring to the industry.

After starring in several multi-starrers, Vaibhav finally goes solo with this film.

You could see that he struggled with his expressions because this happens to be his big debut as a solo lead, one can expect him to be nervous. Nevertheless, he fits in his role and makes us believe that he can be a better lead actor with time. Remya doesn't have a meaty role but it's good as it is because the director doesn't let the romantic angle overshadow the main story. Shree ensures that we aren't bored by any overdose of melodrama and he succeeds at it.

Sayaji Shinde, Kota Srinivasa Rao and their henchmen provide entertainment in appropriate proportions throughout the film. The climax scene between Sayaji and Kota where they argue about money and the character Money (not knowing that they are talking about two different things), is a laugh riot.

Paramesh Krishna's willingness to edit at right junctures has worked in the film's favour, while Thaman's background score lingers on even after you leave the cinema hall.

"Damaal Dumeel" is a reasonably good dark comedy that you seldom see from an industry that has an urge for predominantly making masala entertainers.