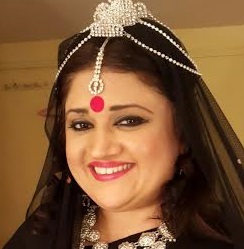 Sweety Walia, aka Pammi of Star Plus' Ye Hai Mohabbatein, always entertains the audience with her acting skills on the show. While the audience loves Pammi aunty a lot, it looks like Sweety is all set to explore her skills and try her hand in one more show.

The show Bal Gopal Kare Dhamaal on Big Magic, is gradually making its place in the hearts of the viewers with the interesting plot and comic acts.

As reported earlier by us actress Anita Hassanandani, is making an appearance on the show as a glamorous diva. Next to join the cast of the show is Sweety Walia.
Our source says, "Sweety Walia, has been roped in for an episode where she will be seen essaying the role of Shamila who will Yamraj's wife."

Sounding excited Sweety says,  "I am shooting for Bal Gopal and it's an hilarious experience. Yamraj dominates everyone but his wife Shamli dominates Yamraj. There are some scenes which makes me really laugh out loud."
To know more keep reading this space!
Phalguni Sharma