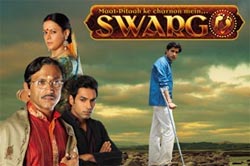 There have been many twists and turns that have been successful in keeping the viewers glued to the show. Although certain aspects of the story-line have miffed the audience so much that they have come down against it in protest, most of the days for Bidaai have been undoubtedly sunny.

When contacted Dheeraj Dhoopar aka Ansh said, "This is my first show and I am so excited that it has completed 200 episodes. Whatever I am today is because of Rajan Sir and this show. I am so lucky that I got such a show and the chance to work with the number one production house."

So how did you celebrate? "We all actors went out and had a small get together…that's how we celebrated. Now waiting for Rajan Sir to give party," Dheeraj candidly tells us.

We contacted producer Rajan Shahi who says, "It's good we completed 200 episodes. I wish the whole of my team good luck for the future. They have truly worked hard on this show and their hard work is one of the important factors that's worked out for this show."

abd_20 10 years ago well i am very happy i wish in coming
episodes the show will progress...

neetusidhu 10 years ago congrats to the whole team...keep up the great work...love the show

On Return to TV, Ellen Addresses 'Toxic Workplace ...
12 minutes ago

Kaveri Priyam on Being Disappointed With 'Yeh Rishtey Hai ...
22 minutes ago