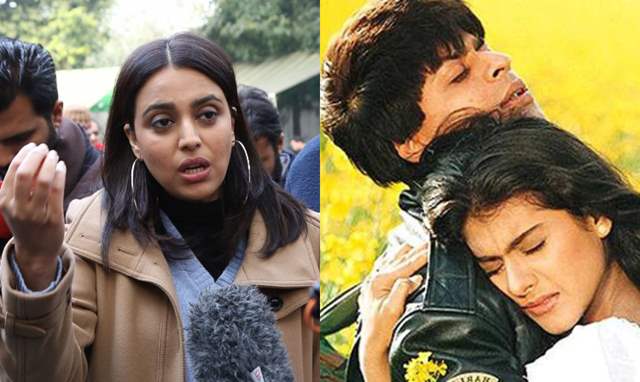 The iconic Bollywood film - ‘Dilwale Dulhania Le Jayenge’ completed 25-years yesterday. The film is known to rekindle love amongst teenagers back in the 90s and it continues to receive love from the fans even after two decades since its release. The songs, dialogues are something which cheers and bring out the excitement even today.

However, actress Swara Bhaskar has a totally different take on the film and even expressed her concern about the iconic love story. While the cult classic film received praise from all quarters of the industry, Swara condemned Shah Rukh Khan’s character in the film.

In a shocking turn of events, Swara took to her Twitter handle and posted a tweet that mentioned the film makes stalking seem romantic.

The tweet comes after a user pointed out Raj’s portrayal and his perception of love. Responding to the tweet Swara wrote: “Sadly u r are right.. I mean abt what all Raj does.. This is precisely the power of #Bollywood right? It makes stalking seem romantic. And we all are influenced by it - sometimes in the form of nostalgia & sometimes despite our own best intent. We all need to learn & change :) :)”

The film commands a cult following even today across the globe. the film was shot in both India and abroad, and also spoke about how Indians who have gone outside in the quest to earn a living, can never disconnect from their roots.

While the Covid-19 crisis forced theatres to shut down, DDLJ was still being screened at the Maratha Mandir cinema in Mumbai even after 25-years from its release.