Moti Sagar confirmed this, saying "We are doing a show called Swami Narayan, but things are in its nascent stages. I can''t divulge any other information".

When asked about the channel he says, "It is for one of the National GEC channels, that is what I can say. For more information you need to wait." 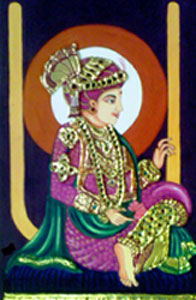 Our khabroo chirps that, "It will be for NDTV Imagine only. The producers had finalized this project long back, but the strike  postponed it. The shoot has not yet started and they are now on the verge of finalizing the actors".

"The location will be definitely out of Mumbai, somewhere in Gujrat where the shoot of many other Sagar Arts shows have taken place", concludes the source.

Lord Swaminarayan, the founder of the Swaminarayan Sampradaya, was born on 3 April 1781, in the village of Chhapiya, near Ayodhya, North India. Having mastered the scriptures by the age of 7, he renounced home at 11 to embark upon a 7 year spiritual pilgrimage on foot across the length and breadth of India. Eventually settling in Gujarat, He spent the next 30 years spearheading a socio-spiritual revolution. With a faithful following of 500 Paramhansas, He established the Swaminarayan Sampradaya, introducing social reforms, serving the poor and the needy, challenging superstition, addictions and blind faith.

His work concentrated on  promoting personal morality and moulding spiritual characters. In a life span of 49 years, He enriched humanity with six majestic mandirs, revealed the Vedic philosophy of Akshar Purushottam worship, and imparted deep spiritual wisdom in the sacred scripture - Vachanamrut. In His own lifetime, He was worshiped as the supreme God by hundreds of  thousands of devotees. And He promised to remain ever present on earth through a succession of spiritual Gurus-

Well, it is surely raining mythos on television now!!

patelniyati2004 11 years ago OMG! this is really exciting news for me as i believe in Swaminarayan Bhagwan and thanks for the article!!! this is awesome news!!!!!!!!! :-D

hindu4lyf 11 years ago It''s great that they take the majority of the audience in India and create a show for our needs.
Hopefully one that makes sense though unlike Ekta''s shows! :@

~*puja*~ 11 years ago That''s great, only Sagar Arts can do justice to a mythological show...

.Angel 11 years ago NDTV Imagine rocks and star plus socks

will watch it as long as it''s on NDTV Imagine.

sam1903 11 years ago thanks waiting for another mytho drama from sagar arts....

Shabana Azmi speaks about recovering from her Devastating ...
2 minutes ago

Who is AK in Sushant's Unseen Video that has Surfaced? Watch ...
6 minutes ago

No Bail for Rhea Chakraborty and Showik Chakraborty? Bombay ...
42 minutes ago