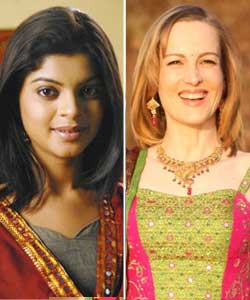 Suzanne Bernert who has been seen in many Balaji shows and Zee TV's Sanskaar Laxmi as Jennifer have bagged her first reality show on ETV Marathi.

Sneha Wagh, who needs no introduction, will also be seen with Suzanne Bernert on the same show. As the show basically deals with a traditional Maharashtrian Traditional dance form called 'Lavani', they will be expected to learn and perfect the same.

We contacted Sneha Wagh who confirms, "Yes, I am doing a Marathi dance reality show titled Dholkiyachya Talavar which is going on air from today. It was a thrilling experience and I hope the audience likes my performances."

We too hear that Sneha Wagh will also be seen on Imagine TV's Nachle Ve With Saroj Khan shaking leg with Supriya Kumari on the track 'Jhumka Gira Re'. The episode will air this week.

Tellybuzz wishes both of them on their new venture.

9 years ago this girl surprises me everytime..from tv to bengoli cinema with aparna sen to marathi movies to lavani show..uff