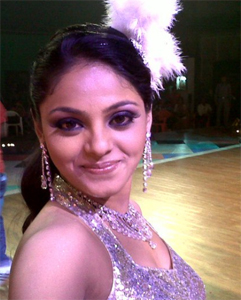 The trend of using item numbers in television shows continues, and this time it is Supriya Kumari who gets a sizzling entry via an item number in RG Media & Entertainment's Armanon Ka Balidaan on Imagine..

Just like her mother Kabootari Maayi (Dolly Bindra), Supriya will portray the 'chalu' character Meethi who sports a vernacular look. Dressed in a typical gagra choli, her hair tied in ribbons, decked with ethnic oxidised jewelry, the girl will be a mix of black and fun..

Our source states, "Supriya has been given a rocking entry sequence wherein she burns the dance floor to the item number 'Beedi Jalaile'… Thro' the song, Meethi's Bindaas attitude towards life, wherein she can trap any a man will come to the fore".

When contacted, Producer Ravindra Gautam states, "Supriya Kumari's role of Meethi will be very similar to her mother Kabootari Mayi, and as the story goes, she will be much more than her mother. Meethi's entry sequence will be a typical item number where she will be dancing to the song, 'Beedi Jalaile'… Soon after Sumedha and Radhe's marriage, Kabootari Maa will arrange for a party wherein Meethi will dance her heart out. The family being crass will make merry in their own way, which will make Sumedha and her family feel awkward".

Supriya Kumari told us, "Yes I have begun shooting, but have not shot for the entry dance sequence yet. I am told that the number is 'Beedi Jalaile', but I am not sure. I will be able to talk about it once I finish shoot".

We hear that Supriya's entry sequence will be aired this Thursday..

indumak2002 9 years ago Supriya, you were really good as Meethi in AKB-A. But this is just not what fans expect to c from u. We want to c u soon in a good lead role in some good show with Sharad as ur pair or even better, in the BP Sequel.

king99 9 years ago Supriya we miss you so much as Amoli. Come back with Sharad soon.

sweetsandhya 9 years ago Liked Supriya's role but cannot say the same about the show though.

Tinacool 9 years ago All the best with the new show. Surely u will capture hearts like u did with Bairi Piya. Love u hamesha :-)

shivani003 9 years ago All the best to her for her new show. I probably wont be able to watch since Imagine doesnt run here but glad to know she will be in fresh avatar. She is a good actress so Iam sure she will do complete justice :)

Breaking
Breaking Erica Fernandes confirms shooting for a music video with ...
51 minutes ago