This Saturday, the stars will descend on your television screens as NDTV Imagine presents the prestigious, star-studded Sunsilk Apsara The Producers' Guild Awards at 8 p.m. on Saturday, April 12! 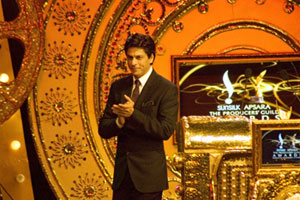 Featured Video
Over 28 Apsara Awards were presented this year, of which 16 Apsara's are for the Popular Awards category, 7 Apsara's for the Technical Awards category and 5 Apsara's for the Special Awards category. Indian cinema legends such as Amitabh Bachchan and Shah Rukh Khan are amongst the nominees for the awards along with the hottest stars of today from Abhishek Bachchan, Akshay Khanna and Shahid Kapoor to Kareena Kapoor Aishwarya Rai, Tabu and Rani Mukherjee!

This performance-packed, entertaining evening is hosted by the dynamic Jaaved Jaffery with the 'captain of the Chak De team' Vidya Malvade. Sunsilk Apsara The Producers' Guild Awards features scintillating performances by Salman Khan, grooving to his hits from Partner and Salaam e Ishq; the ravishing Kareena Kapoor swaying to the tune of Its Rocking and Yeh Ishq Hai. Also setting the stage on fire, are the sexy leading ladies Katrina Kaif and Bipasha Basu with their scorching performances! Catch the special performance by the country's favorite item girl Rakhi Sawant as she presents her new song Dekhta Hain Tu Kya from Krazzy 4. Riteish Deshmukh has all the girls in the audience cheering for him as he performs to the title track of Heyy Babyy!

A special part of the evening, is The Film & Television Producers Guild of India's Life Time Achievement Award. The recipient of this award has been nominated and voted by the Guild's Special Committee, which is bestowed for outstanding achievement in fostering the finest ideals of the film & television profession. 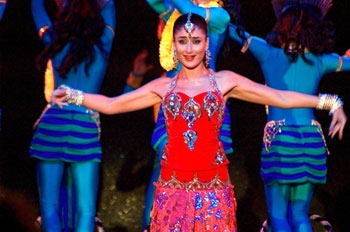 excellence and achievements in the industry. Each year the awards have received tremendousThe Sunsilk Apsara The Producers' Guild Award has been instituted by the Film and Television response with the participation of the prominent names in the industry and the presence of the leading artists and performers adding to the glamour quotient to the event. This year the awards ceremony was attended by personalities like Yash Chopra, Akshay Kumar, Govinda, Rakesh Roshan, Ranbir Kapoor, and Deepika Padukone, amongst others.

So don't miss this sizzling showcase of excellence in the world of Cinema with Sunsilk Apsara The Producers' Guild Awards at 8 p.m. on Saturday, April 12th only on NDTV Imagine.