View Profile
It’s after ‘lost in town’ Kaafila and so-so entertainer Apne that our own gadar bhai Sunny Deol is maintaining a very low profile now a days. But as it’s told no pukka khila 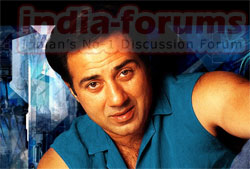 Featured Video
di can stay away from the field for long. Thus, talking about his disappearance from movies, this is what Sunny had to say - “It all because of my back pain which saw me undergoing 3 major operations.”

Wasn’t it boring sitting all day long at home? “Not at all. I was working on my movie scripts which I am going to direct,” quick came the reply from the macho man. And whatever he revealed next was simply enough for giving us a 440 V jhatka. “We are going to shoot four films in the coming year. Names for two among them have been finalised. First is going to be Man.” And the very next moment, the dhai kilo ka haath made a blasting announcement describing how he has roped in well established directors to assist him in his directorial ventures! Yes, you read it right, he doesn’t have assistant directors assisting him in the movies. Rather, he has directors who have earlier directed movies assisting him!

“I have Neeraj Pathak assisting me in Man while Kabir Sadanand is assisting me in Chamku,” bamboozles the actor. This comes as a complete shocker for the simple fact that both these names have already have independently directed movies under their belt. This simply proves one thing – either Sunny is lucky enough to have such overly qualified assistants, or the directors have run out on their luck.

Well, whatever the matter maybe, we better keep numb and wait for the movies to get released. Who can say, next time even Bhanshali may apply for assisting Sunny!