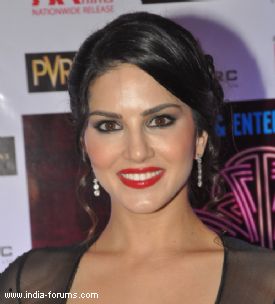 Adult film star and Bollywood actress Sunny Leone has topped the imagery downloads category in an annual survey of mobile attitude of customers.

Airtel Mobitude 2013, the fifth edition of Indian annual survey, reveals that Sunny is the most downloaded actor, both in female and male categories, with a whopping 300 percent more downloads than even superstar Shah Rukh Khan.

"Mobitude captures these trends to bring out the true reflection of the customer's likings and usage habits. The verdict this year has interesting findings of the preferences of more than 194 million customers across the country," Govind Rajan, chief marketing officer, consumer business, Bharti Airtel (India), said in a statement.

In the female category, the "Jackpot (2013)" star is followed by Sherlyn Chopra while Priyanka Chopra takes the third spot.

Priyanka's cousin Parineeti Chopra made it to the fourth place, and Poonam Pandey rounds up the top five in the category.

Among males, Ranbir Kapoor has the maximum imagery download. The second place goes to Shahid Kapoor followed by Ranveer Singh. Shah Rukh takes the fourth place while "Dabangg" star Salman Khan is in the fifth spot.