Cricket Fans have a reason to rejoice this weekend! To celebrate the growing Indo-Pak cultural bond established through the field of cricket, Indian and Pakistani cricketers will be seen coming together on 'Chak De Yaara', a grand musical extravaganza. Chak De Yaara, hosted by Sahara India Parivar at the picturesque Sahara Saher in Lucknow will be telecast this Sunday March 30th at 6 pm only on SaharaOne Television. 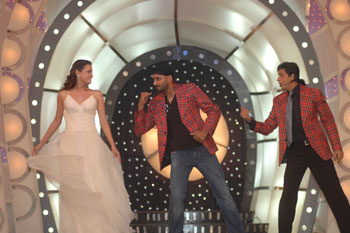 Featured Video
There are two things Indians are crazy about – Bollywood and Cricket. And when stalwarts from both the fields join hands, there can only be fireworks all around. Sajid Khan will be seen hosting the show while Kareena Kapoor, Dia Mirza, Ganesh Hegde, Koena Mitra, Niti Mohan and several others will be seen extending a warm welcome to the Indian and Pakistani team members with their sizzling performances.

Watch out for the Badshah of Bollywood - Shah Rukh Khan as he entertains the crowd with his funny, witty and constant interactions with M S Dhoni, SreeSanth, Yuvraj Singh, Shoaib Akhtar and many more as he manages to leave the cricketers flushed and the crowd asking for more.

That's not all! The huge element of surprise will be unveiled when some of the cricketers walk up to the stage to shake a leg with Shahrukh and other bollywood stars. Catch Shreesanth dance to the tune of 'Dard-E-Disco' as he effortlessly manages to leave King Khan himself in awe. Also donot miss Shahrukh Khan teach Harbhajan Singh some tactics to romance the beautiful Dia Mirza. 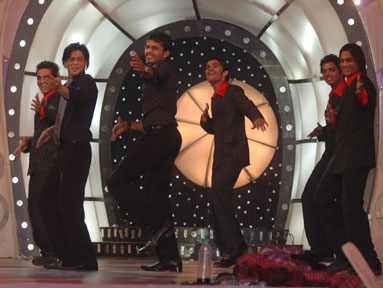 We at SaharaOne Television have always believed in showcasing different programming on our channel. We take it as our privilege to showcase the amazing chemistry between the two teams as they come together for this celebration. We are sure our viewers will enjoy and at the same time look up to their example of staying in harmony despite the differences.'

The event will be followed by chief guardian of Sahara India Pariwar, Hon. Shri. Subrata Roy Sahara felicitating the Indian and Pakistani cricketers.


So don't make other plans this Sunday as the grand musical event 'CHAK DE YAARA' promises you an evening full of excitement and joy as the Indo – Pak cricketers and the biggies from Bollywood come together to enthrall you on a different wicket.

14 years ago this is a very old show. I thought it was on Star Plus.

14 years ago I saw Sahara One yesterday, 30th March, they showed Malamaal Weekly movie but not the event

14 years ago This was a awsum show, but im sure this came on star plus before> correct me if im wrong guys

pagalladki247 14 years ago Could someone plz tell me where i might find the video of this event...thanks

ankygoel 14 years ago hey guys...this has already been aired on TV...somewat in december....so i guess thr is no craze of watcing it again....