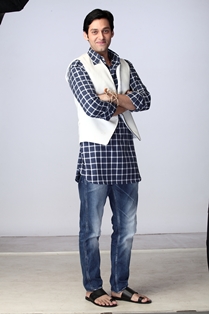 Sumit Vats has been roped in to play the character of Chintoo Singh Chautala in Big Magic's upcoming show - Ajab Gajab Ghar Jamai. Produced by Red Dot productions, this comic caper is slated to go on-air later this month.

Speaking on his role, Sumit says "The comedy genre is working excellently with audiences and I'm excited to be a part of this show. My character is the youngest son in law and the house is a web of madness. The show, with several eccentric characters, is going to definitely make audiences laugh!"

Ajab Gajab Ghar Jamai is the tale of Shaktishaali family that follows a tradition of bringing home a son-in-law instead of sending the daughter to her sasuraal. While the household is run by the matriarch, lovingly called Naniji, there are four jamaai's across generations who try their level best to prove their worth to her.

Chintoo Singh Chautala is the youngest Jamaai of the house and is a shrewd fellow. All of his time in the house is spent in plotting ways to manipulate Naniji who outwits him every time.

jewel47 7 years ago Welcome back Sumit.Best of luck on your new show.

7 years ago chintysingh chautala .your saas will outwit you. it will be nice to watch. I love to watch female dominating

7 years ago Chintoo , waiting for you . Thanks for the new article .