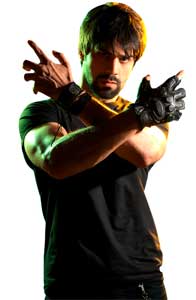 The weather was getting colder, darker and it was sending the chill down to the contestants' spines. Some of the lucky winners from the previous stunt managed to get a safety band and were exempted from this bone cracking stunt. The time had come to test yet another extreme mental and physical torture to the contestants. One man went out as a real Khiladi by achieving something almost impossible!

The name of the stunt was "Khulja swim swim". While the stunt was being explained by Akshay, one could see the fear factor in the contestants' eyes! A big water tumbler was inserted into the cold deep sea with the guy contestants in it.

The task was to grab a 'thumbs up' from the bottom of the rotating tumbler, open several locks and then pass it on to the respective female contestants. Sumit Suri ( Kashmira Shah's partner) was the only contestant who was a hydrophobic , but he portrayed a great deal of courage, confidence and maturity by completing the task successfully. Akshay was overwhelmed at this display of courage shown by Sumit and did not stop himself from hugging him generously and went on praising him for the same.

Well, one thing is for sure the Khiladi of Bollywood is definitely motivating and appreciative for the brave!