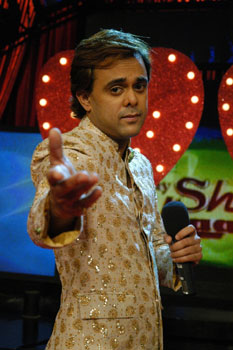 The last eleven days saw eight television celebrities compete with each other in the ultimate musical show- Clinic All Clear Say Shaava Shaava only on NDTV Imagine.

After a host of heart warming performances, exciting rounds and series of eliminations, SUMEET RAGHVAN was adjudged the winner of this musical entertainer by judges Karan Johar & Simi Garewal. The ultimate face-off between the three finalists; Apurva Agnihotri, Juhi Parmar and Sumeet Raghvan had some exciting moments including a surprise visit by Kareena Kapoor, Riteish Deshmukh and Farah Khan!

An overjoyed Sumeet exclaimed, "I still can't believe that I have won this competition! WOW! I think it's going to take a while before reality sinks in. But I must say that I had lots of fun on the show. It was great to compete with my friends and have Karan and Simi judging us day after day. I would like to thank Adil, my mentor whose patience has got me so far. We've all had a blast these 11 days, and every moment on the show is an unforgettable experience!"

Sumeet had left the entire nation mesmerized with his consistent performance and garnered the maximum number of viewers' votes. The finale episode saw all the finalists performing on stage for one last time! Sumeet performed on Mast Kalandar and Naina Thag Lenge, Apurva performed on Ek Hasina Thi and Banke Tera Jogi and Juhi performed on You're my love and Pehla Nasha.
Featured Video

14 years ago Congrats SUmeet! Now bring back Sarbhai Vs Sarabhai :D. Man, I miss that show!

14 years ago its funny how no1 xpected him too win.. most pple were sayin apruva or juhi will win.....hehe but congrats too all the finalists

+ 4
14 years ago So finally we have a genuine winner in a reality show who really deserved to win..
I just heard him sing once...''Albela sajan aayo re''...and wowwww he was so amazing...

congrats to sumeet for winning

well done to juhi and apporva

+ 10
14 years ago Congratz to Sumeet.He is really a fabulous singer.

14 years ago congrats to Juhi Apoorva and Sumeet

Special Congrats to Sumeet for the win.

ooh my love song sang by Juhi had all the nauces and tones for singing in it. She was terrific, she balanced her voice to perfection.

and she always wished she gets the chance to sing the difficult songs and she got it. wow

Juhi was looking hot and gorgeous in that golden-red outfit.

14 years ago Congratulations to all the participants and to Sumeet in particluar...He did a fabulous job!!!!

+ 3
14 years ago I am very happy with Sumits win....finally a deserving winner from a reality show!!