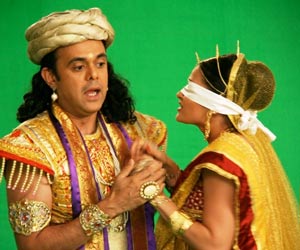 Known for their amazing comic timing and their tongue-in-cheek brand of humor, actors Sumeet Raghavan and Rajeev Thakur have won many accolades and applause for their comic acts. From playing funny characters in fiction shows to hosting reality shows or taking part in various laughter shows, the two have had the audiences in splits with their wisecracks, mimicry and spoofs.
Paired together earlier, the two are known to complement each other's styles. This time, the lethal combination is back together playing Dhritarashtra  and Sanjay from the epic Mahabharat, spoofing Bollywood films nominated at the Lux Cozi Zee Cine Awards 2014 .
Joined by a slew of mimicry artistes and look alikes of various actors, Sumeet and Rajeev will be seen in a 1 hour special Bollywood spoof on the movies Krrish 3, Dhoom 3, Bhaag Milkha Bhaag and Chennai Express. Putting together a hilarious act, all the actors were so well rooted in their character and resembled the original stars that they were mistaken for the actual Bollywood actors by many amongst the audience present at the studio.
Playing the role of Aamir Khan from Dhoom 3, and carrying off the hat-look quite well, Howard fit the bill as an exact replica of Aamir Khan. Priya Raina - playing the character of Deepika Padukone from Chennai Express was quite a vision as the bespectacled, nerdy, saree-clad southie siren. While she was rehearsing the famous scene of a dream sequence where Deepika ends kicking Shah Rukh Khan in her sleep, Priya Raina ended up kicking the Production controller by mistake.
Do not miss the Fully Filmy' episode of Zee Cine Awards on Saturday, 1st February at 7 PM, Only on Zee TV!
0 Likes

-Dil- 6 years ago QUOTE : Do not miss the Fully Filmy' episode of Zee Cine Awards on Saturday, 1st February at 7 PM, Only on Zee TV! : UNQUOTE

Urmila Matondkar Does Not Regret, But Ready to Apologise for ...
18 minutes ago

Shabana Azmi speaks about recovering from her Devastating ...
41 minutes ago

Who is AK in Sushant's Unseen Video that has Surfaced? Watch ...
45 minutes ago

Nishant Malkani: I may not agree with everything Kangana ...
5 hours ago
View More
TOP