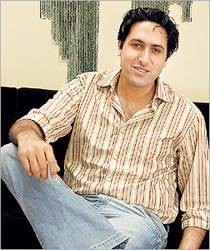 Sumeet Sachdev who was on a hiatus after Kyunki which made him a household name thanks to his character Gomsy, is back with Balaji Telefilms' and Sony's Pyaar Ka Bandhan.

According to our source, "Sumeet will be playing the character of Ronak who will be opposite Araina."

When contacted Shivangi, Creative, Pyraa Ka Bandhan, says, "Ronak is completely different character in the show. He is a horse rider who trains horses and is employed under Araina. The character is very intense, very silent but has a magnetic appeal. We chose Sumit because we didn't want the typical look of horse trainers. We wanted someone classy."

When contacted Sumeet said, "It's after more than a year that I am back on TV. It's not that I didn't get any offer but I was very busy with my short film titled Rehman Saheb ko phone karna hai and after it got completed I got a call from Balaji for this role. The character is very much different. He is not a sweet boy but a very confident guy."

The episode featuring Sumeet's entry will be telecasted on Monday, November 16th.

choti11 13 years ago doing a great job in the show two thumbs up!

13 years ago its a ditto copy of prida track from LNMDJ..Huh..

13 years ago i had a big tym crush on sumeet
and watched all his shows right frm kyonki, khwahusah and karam...
i am so happy..
bt alas i dnt watch dis show bt no probs..
u gonna rock d show

13 years ago araina is a newcomer...n he is a old guy.no yaar matching is imposible...they shud introduce a new actor for araina.shes 2 cute 4 her a cute as wel as tough lookd dude needed.nt sumit.

ppprettygirl 13 years ago what a wow choice!!!!sumeet is indeed just the right choice!!!gr8 face n a brilliant actor!!!the girl will have to match to his standard tho!!!!n i m sorry but only blind people would find him old!!!moreover 4 these people...do love stories happen only between 20yr olds?????

13 years ago Noooooooooo not he!!!He is ugly & cant act much better

+ 3
13 years ago Agreed he seems slightly old for araina. But the more imp question for me is can araina match his acting prowess... sumeet is an amazing actor,much better than most of the so calld young actors on tv hu cant act to save their lives!!!!!!!