Tellybuzz had reported earlier that Imagine TV and SOL Production's upcoming new reality chat show under the aegis Meethi Chhoori No. 1 has roped up more than 25 female celebrities. 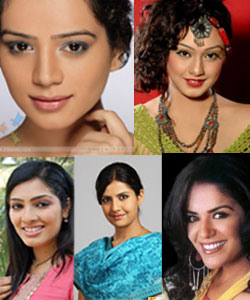 The latest update on the celebrity list is that Smriti Kalra, Sukirti Khandpal, Mona Singh, Abigail Jain and Hritu Dhudani will also be a part of the show.

When contacted, Simi Seth aka Smriti Kalra of Zee TV's, 12/24 Karol Bagh asserted, "I have already shot for an episode. Initially I thought it will be a normal chat show while all the other girls knew each other I did not know anyone but, it was fun pulling each others leg and will be shooting for my 2nd episode tomorrow."

When contacted Sukirti Khandpal who just bagged a priced role in Ekta Kapoor's upcoming show 'Fanaa' exclaimed, "It's a very different experience all together and enjoyed it. I'll be doing more than one episode for the show."

When talked to Birwa aka Ritu Dudhani of Imagine TV's, Bandini she confirmed that she is a part of the show.

When contacted, Abigail Jain of Bandini in a tone of acceptance replied, "The experience was nice and I'll be seen in one episode."

We tried contacting Mona Singh but she remained unavailable.

9 years ago Dear Smiriti, You are great in this show.

+ 2
10 years ago looking fwd to see yet another episode of ragini's wit..