The loyal viewers of Star Plus' Sasural Genda Phool have been witnessing the dilemma of Suhana (Ragini Khanna) as she is not able to decide whether to leave her sasural and move on or not. 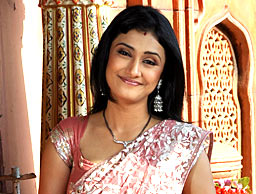 The coming Maha-episode, this Saturday i.e. On Sept. 11, will eventually resolve this matter, as Suhana decision will get disclosed. This will however give rise to a new phase in Suhana's life, wherein she is determined to become a good bahu.

A little birdie tells us, "The manner in which Suhana tries to transform herself into a good bahu, will be extremely hilarious. She will learn something by watching TV, she will dress up in a new avatar; will try do normal chores in the house and many such stuff. It will be interested to watch, how the Kashyap family and her father react to this change in Suhana."

We hear that next two weeks will put Suhana in some enduring situations and the manner in which she reacts will be an interesting watch.

When contacted, co-producer and writer Zama Habib told us, " The maha-episode is a very hilarious episode, where Suhana tries to be a good bahu. The pace of the show in the last few episodes had slowed down but we promise the viewers some rocking and fast-paced episodes now. I would require viewers to be patient as this is the story with no false drama. We want Suhana to explain fully relationships, understand her responsibilities, and discover the pathos in every family member's life and relate to them. So, we need a bit of space for showing all this. Above all the story is not a love story of Suhana and Ishaan (Jay Soni), but we consider it as a love story between the entire family and Suhana. Yes, Ishaan is an integral part of the family and he will go on to be one of the best things in Suhana's life. But that will have to wait for the moment."

Viewers can get ready for Suhana designed hilarious sequences in the maha-episode on Sept. 11, in Sasural Genda Phool.

Nitya31 10 years ago I can't wait for sohana to be funny because before it was so boring. i wish sasuraal genda phool to be aired on saturedays and sundays.

10 years ago there would be alot of hapi moment in this segment ...its a gud thing dat c is tring to impress evriwun n not just ishaan...

10 years ago Good that they realised about the pace, but I am really eager to see the future track, sounds pretty interesting and Ragini is quite brilliant with comedy, hoping for some good entertainment :)

It deserves all the awards!

10 years ago it is really good that it is not about Suhana falling in love with Ishan (first) and then, having to make sacrifices/adjustments with his family....it is the other way round.....

she is gradually falling in love with the family and an inseparable bond of love and indispensability is being created.....this will make her changeover to a responsible bahu more stable and cool....

Ishaan, no doubt, is the best thing to have happened to her...come on yaar...duniya mein kitane aise husbands honge..... he he...

10 years ago i love this show... its a good change from the other saas bahu shows, where the CV's and production people think that the viewers are dumb.

+ 4
10 years ago Iam really glad that SGP is not just about Suhaana n Ishaan and stupid falling and eyelock scenes. Its about relationships with the whole family. That is the beauty of this show :)

10 years ago its one of few gud shows on Indian TV these days.. luv this family!