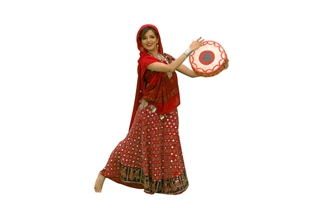 SAB TV's popular show Baal Veer has completed 300 episodes and viewers will be in for a treat as grand celebrations in form of a maha-episode are in store. The entire pari-lok will be seen rejoicing as Baal Veer has successfully defeated Chhal pari (Sugandha Mishra) in her first attempt. In order to take revenge, Chhal pari disguises her as a banjara' and enters pari-lok to be a part of the celebrations.

Dressed in vibrant banjara clothes, Sugandha will sing and dance with all the paris, camouflaging her true evil identity.

As she was practicing for the dance sequence, she hurt her knee quite seriously and was advised rest. However, the talented actress did not step back from or slack on her commitment towards her work. Inspite of the pain, she rehearsed relentlessly and insisted on taking a break only after the 6 hour shoot was complete. Sources from the set tell us Sugandha had a smile the entire time, making it impossible to guess that she was going through so much of discomfort.

With Sugandha's entertaining performance and the festive mood in pari-lok, will she gain victory with her new plan as she enters pari-lok in a disguised form?

10 years ago LOL ... its so funny when singers say that. For singers like Latatai and Ashatai, one doesn't even remember their actresses anymore. One only remembers their ethereal voice. I agree with the person who has said that the kind of songs Alisha sings are not memorable without their performance. Why should it hurt when Sridevi gave so beautiful expressions for Kaate Nahin that even Shekhar Kapoor was in a dilemma - whether to focus on her face or her dance. He had even said so in an interview. As for songs like Munni, Kajra Re ... they are today's news, but tomorrow's scrap.

10 years ago I believe she is a good singer for certain songs. Her voice limits her to sing only certain songs, and that is why reaches limited audiece. I agree they are paid peanuts, and I am of the opinion they should be paid at least 5 fold. If she wants to be more popular then she needs to give lot more hits.

If this becomes a norm than the Music Directors of non-album songs will say - Why should singers take credit of our music!!

You need to have a distinct voice and one that can make impression on others... We can still make out if its Lata Mangeshkar or Asha Bhosale or Shreya Ghoshal singing.. Its a uniqueness and melody in their voice that shines through the song and people recognize them!

Songs Alisha sings (or for that matter Sunidhi sings) - it will be so difficult to see them past the performance !!! They are mostly item & peppy songs which are popular because of its music/performance - not who is singing them!

Sorry Lady... You please rest and stay home... World out there is fierce!

+ 3
10 years ago awww she's right,
so love her voice, and i remember her cassette from my childhood days! :D
some singers have built up a good rep and do get credit and awards ya know....but the actresses do steal the limelight more...and in actual fact she is soooo right...it's ridiculous!

10 years ago she has an amazing voice,
and i agree with her. she should get credit for her work

Shreya and Sunidhi are so much better and Abhilasha will be making her way up soon as well!

10 years ago shes right in the last paragraph singers need to be paid their due, but if she was so unhappy with playback singing why did she continue to do it for so long and then complain, she should have just quit earlier on. She did say she preferred to be jobless at home then let her talent go to waste, so why didnt she? Obviously she needs the peanuts to live on.

padindoo 10 years ago I think Alisha is justified about seeking better pay but I dont get her frustration about playback singing. Songs are written for characters and situations, so the actress who plays the character features in the song. May be Alisha should try full time acting and see if she can emote well enough to do justice to a song.

10 years ago I do acknowledge the singers of these songs, not the actors and I love her voice. Playback singing gives her the opportunity to sing forever if she wants. And with playback your voice lives on for eternity in that movie. Sometimes the movie is terrible, but you remember the beautiful singing. I own a lot of soundtracks and I focus on the artist, not the actors when I listen. But her comments show an ungrateful attitude for her success. Honestly Alisha even a dog knows not to bite the hand that feeds him. Shame on you.