Sudha Chandran is breaking her hiatus with Sahara One and Swastik Pictures' Mata Ki Chowki. She plays a prominent role in the coming episodes along with Sudesh Berry. 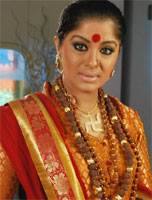 Featured Video
According to our source, "Sudha plays the role of Maha Shweta Devi, a lady in her thirties who keeps getting Mata inside her in every satsang. She uses her histrionic skills to convince people that her accomplice Sheel Kumar(Sudesh Berry) is the ultimate God. The duo usurps all the money from naive devotees so that they two along with Shweta Devi's son Aman can live a king-sized life."

We spoke to Sudha Chandran who says, "I'm very happy to return to television with a good production house like Swastik Pictures. I'm very much enjoying playing Maha Shweta Devi. She is this very rustic and conniving female who commercializes the name of God."

She elaborates her look saying, "I'll be wearing Ghagra Choli and bindis with more of a religious design. Right now I'm wearing the one usually sported by UPites during Chatt puja, the one that runs from the nose to the forehead. Most of the times I'll be seen sporting a large round bindi."

"Our country is full of people who buy anything and everything in the name of God. This role of mine is just a reflection of that," Sudha signs off.

+ 4
12 years ago Ramola rockz... plzzz come back in any ekta serial plzzzzzzz..

+ 4
12 years ago hey sudha u r one of my favorite actresses.. nd ur work in kahin kissi roz as ramola was Superbbbbbbbbbb.. love u..

+ 6
14 years ago yeah... manav does hane the potential to make it real big...
and can someone tell me, is bhavra the movie manav is acting in? he said that's his fav work done by him... well, if u ask me, i will say tt manshaa is my fav show that he acted in...