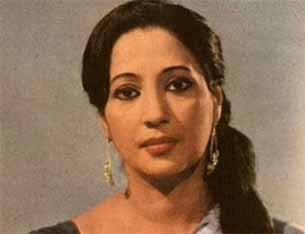 The condition of legendary Bengali actress Suchitra Sen, under treatment in the critical care unit (CCU) of a nursing home here, is stable, a medical bulletin said Thursday.

However, her heart rate, blood pressure and oxygen saturation are being constantly monitored.

Undergoing treatment for chest infection, Sen was Sunday night rushed to the hospital after her condition deteriorated and her heart beat became irregular.

"Her vital parameters are satisfactory. She took her normal prescribed diet," said the latest report.

The statement said she is also under review by a cardiologist and routine relevant investigations are on.

Sen, 82, was admitted to the nursing home last week after she complained of breathlessness.

Starting her film career with Bengali movie "Sharey Chuattor", she is known for her performances in films like "Deep Jwele Jaai" and "Uttar Falguni" in the same language as well as Hindi movies "Devdas", "Bambai Ka Babu" and "Mamta".

Sen, who won the best actress award for "Saat Paake Bandha" at the Moscow film festival in 1963, quit acting in 1978.

Since her retirement, she has been living a reclusive life and only meets her daughter actress Moon Moon Sen and granddaughters Raima and Riya Sen.

Riya Sen: Being Sexualised at a Young Age made me Uncomfortable; she ...

Naagin 5: Veer to return to destroy Bani and Jay?
14 minutes ago

Jaya Saha to be Arrested by the NCB Soon: Report
55 minutes ago