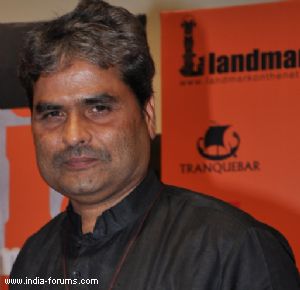 A thunderstorm followed by heavy rains destroyed the set of Vishal Bhardwaj's film "Matru Ki Bijlee Ka Mandola" and injured five people. The film is being shot on the outskirts of the city.

The force of the storm Wednesday night was so strong that it caused a 20-foot-high light tower to snap and fall to the ground, injuring five unit members, said an eyewitness from the set, which was put up in the fields outside the city.

"Due to storm, the several trees fell and blocked the road. The situation was so bad that the other unit members carried the injured on their shoulders to a safe place and from there they were taken in an ambulance to a hospital.

"Three light boys, who were injured, were operated upon last (Wednesday) night and two surgeries were done today (Thursday) morning. Their condition is being monitored closely. The shoot has been halted for the moment," he added.

Imran Khan and Anushka Sharma were also present there, but they are safe.

An upset Bhardwaj said: "Me and my unit are extremely distressed by last night's storm. Our heartfelt concern is for our colleagues who were hurt badly on the set."

"It's most unfortunate incident. Damage to the equipment, though heavy, is replaceable, but our deep concern is for our injured unit members," said Vijay Singh, CEO Fox Star India.