This month as we bring you a new edition of Stars: Then and Now, caught under BollyCurry's scanner is a star who garnered overnight success as soon as he stepped into the industry, none other than the Bollywood heartthrob, Hrithik Roshan. Roshan is a dignified actor and a celebrated dancer of the tinsel town. He is one of the handful successful actors who entered this glamorous industry at a young age and has managed to steal hearts all over the world. Here's a walkthrough of Hrithik's journey through his films, since the time he was a child actor to the well-known and established star that he is today. 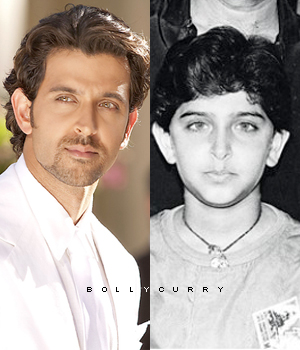 Not known to many, Roshan's first acquaintance with the camera was at the age of six on the set of his maternal grandfather - J. Om Prakash's movie. Little Roshan was unaware of the fact that he was being recorded while merrily grooving at the interlude music of the song "Jaane Hum Sadak Ke Logon Se", a footage which was later used in the movie Aasha (1980). Next he was seen in Aap Ke Deewane (1980) as the young Rahim sharing his tricycle with Ram in the song "Ram Kare Allah Kare", and in Aas Paas (1981) as the young messenger between the protagonists in the song "Shehar Mein Charcha Hai". He also played a small role in the Punjabi movie Aasra Pyaar Da (1983) directed by J. Om Prakash.
Hrithik had uncredited appearances until now in his family's movies and was considered a lucky mascot by all. However a substantial role only came his way in the form of the character Govinda in the movie Bhagwan Dada (1986). The child artist who was cast originally fell ill and the role landed in little Roshan's lap. He played the protagonist's adopted son who is the reason of the latter's redemption and a very important character for the theme of the film. Despite working with ace actors like Rajnikanth, Rakesh Roshan, Danny Denzongpa and Sridevi, young Roshan made his presence felt due to his acting prowess. Later he then went onto assisting his father in various movies including King Uncle (1993), Karan Arjun (1995) and Koyla (1997).
Hrithik Roshan finally made his big debut as the protagonist with Rakesh Roshan's Kaho Naa... Pyaar Hai. The movie was an instant success amongst the audience as well as at the box-office and was declared a blockbuster. It was the highest grossing film in 2000 and the movie won the Filmfare Best Movie Award, while Hrithik received the Filmfare for Best Male Debut and Best Actor.
He then went on to act in Fiza (2000) and Yaadein (2001), both of which weren't received well by the audiences, until Kabhi Khushi Kabhie Gham... (2001) came along. Even amongst the ensemble cast of the greatest actors of the industry, Roshan's role was highly appreciated, a platform where he outdid himself. Thereafter, he had an altering graph with movies that didn't do well like Yaadein (2001), Aap Mujhe Achche Lagne Lage (2002), Kites (2010) and Guzaarish (2010). On the other hand his hit films include Koi... Mil Gaya (2003), Lakshya (2004), Krrish (2006), Dhoom 2 (2006), Jodhaa Akbar (2008), Zindagi Na Milegi Dobara (2011), Agneepath (2012)and Krrish 3 (2013).
Although Roshan's graph has seen the high ups and low downs, today he has surely managed to make a place for himself in the industry and a name that will leave a legacy. Hrithik is one of the finest actors as well as dancers of Bollywood and his upcoming stint Bang Bang, the Bollywood remake of English movie Knight and Day, is being eagerly awaited by the audience. We at BollyCurry wish him all the success that he deserves and desires as he continues to charm the industry and his fans alike with his sultry moves and impeccable acting.
Writer: Pooja B.
Editors: Komal P. and Sonia R.
Graphics: Komal P.
Have a suggestion or comment for BollyCurry? Then drop us a PM at BC_Dropbox today!
9 Likes