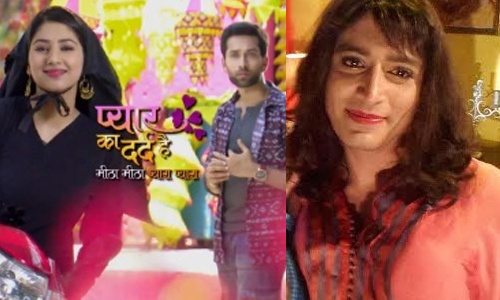 Star Plus' Pyaar Ka Dard Hai...Meetha Meetha Pyaara Pyaara... has been exciting the audience with all the twist the makers are bringing in the tale. The viewers will get a feeling of dÃ©jÃ  vu when the upcoming episodes of show will be aired.

Our source informs us, "Payal (Monica Khanna) and Rubel (Khushwant Walia) will be seen performing an act like that of Hum Saath Saath Hain movie where the on-screen duo will enact each family member. The host of the evening will be played by Sheila (Sonali Naik) and Anuj. Out of all the performances, some of the special performances will be enacted in a peculiar way - Payal will be seen enacting as dadaji and Rubel as naniji. One special performance that the duo will performs is that of Avantika (Manasi Salve) and Harish."

With Pankhuri (Disha Parmar) coming back in the show who was seen dead, our source avers, "Just when Aditya (Nakuul Mehta) is about to put the engagement ring in Ayesha's finger, police will stop Aditya saying that his wife is not yet dead and that she was in coma all this while. The entire family will run to see Pankhuri."

We also hear that the re-entry of Pankhuri is the last attempt by the makers to grab more eyeballs of the viewers as the show is not doing well on the TRP charts for quite some time now. If this does not work out, the channel will pull the plug.

Well, we hope that the new track pleases the audience and the fans get to see more of the show.

Rubel and Payal were amazing in yesterday's episode.

khadeeja_ 6 years ago Cant wait for pankhuri's return!
PaYa rocks and so do Nakuul and Disha
Paya and Nasha!!! are the best onscreen and offscreen

PaYa_Shivika 6 years ago PKDH always Rocks.PAYA/NASHA's chemistry is amazing.Treat to watch them onscreen or off screen.
Love u Nakuul and Disha.
Yes entire cast is very talented.

NeanderthalGirl 6 years ago Many ...i mean almost ALL people stopped watching pkdh after pankhu's dissapointing death and so trps fell like anything!! But now when pankhuri is coming back..people will start watching the show again and so trps are sure to increase!
Wish cvs wud nevr had committed this mistake..but anyways pankhu is comibg back and i am the HAPPIEST IN THE WORLD!!
Entire cast of pkdh rocks!! And that's one of my foremost reasons for watching pkdh..the amazibg actors!!
Love u paya !! Love u Nakuul Mehta and Disha Parmar!!
LOVEEE U PYAAR KA DARD HAI!!!!

khadeeja_ 6 years ago PKDH rocks!
Entire cast rocks as they have beautiful talents that the cvs havent showcased properly! hope they learnt their lesson after the trps down!
since pankhuri is returnign the trps will break the records! cant wait!
even people who had stopped watching are going to start watching pkdh again YAAAY!

Gggt 6 years ago Pkdh will break all trp records once pankhuri is back..!!