Star One shows which have been centering around youth based subjects have not clicked too well with the masses!! While COLORS, the #1 General Entertainment Channel sits cozily with a soaring GRP of 314, Star One lags far behind with a GRP of a meager 51. 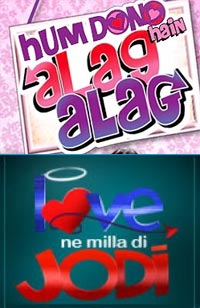 Featured Video
According to our source, "The channel is now looking for a major reconstruction in terms of its programming. This includes plans of considering the closure of youth based shows Dill Mill Gayye and Love Ne Mila Di Jodi".

It is heard that the Shakuntalam Telefilms show Love Ne Mila Di Jodi has recently been served a notice to better its ratings. However, when we called Chandana Sharma, the lead girl of the show, she denied the news.

Producer Shyamashis Bhattacharya, Shakuntalam Telefilms too denied having received any notice and said, "Lots of high points are coming up in the story, with which hopefully the ratings will go up".

Coming to Dill Mill Gayye, sources say that this long running medical drama might wrap up in December. Earlier, it was suggested that the creatives may attempt to resurrect the once highly popular Cinevistaas show with the return of Karan Singh Grover. But with his recent bad publicity owing to the problems in his personal life, the channel is skeptical if he will again click with the audience. Also, chances of Karan and Jennifer Winget working together look dim after all that happened between them.

An insider who is part of Dill Mill Gayye, on terms of anonymity said, "It is fine if the channel wants to take off the show. It has lived its life, but you cannot blame it on the TRP, as the channel's ratings itself don't rock".

Another insider further added that no decision has been taken as of now, but if the ratings of Dill Mill Gayye don't improve, then anything can happen.

It is also speculated that the channel is looking for a complete image change. "In place of the current youth based content, the channel may opt for social and family drama based shows which are popular with other GEC. In such a scenario, even the new property Hum Dono Hai Alag Alag might end. The only show that might survive the purge is Miley Jab Hum Tum, as it is doing well, and of course the newly introduced show Jaane Pehchaane Seh Yeh Ajnabbi".

Another source said that the reason why the above college based show rocks is the freshness of the story and the college back drop, which is nowhere to be seen on television.

Well, let's see whether the existing shows on the channel manage to pass the acid test or not!!

11 years ago KaJen plz work together missing Armaan & Riddhima so much.

soniaisdabest 12 years ago OMG how can they say that!!! Of course KSG will 'click with the audience' hellooo it was KSG who made DMG a hit!!! Stupid CV's just take DMG of air, no one watches it!! It isn't worth watching anymore since you decided not to bring KSG back!!! SHAME ON YOU CV's for using KSG!!!

Plz aisa MAT karna!!!!!!! I love DMG LNMDJ HDHAA JPSYA anything and everything....why are they so eager to transform themselves into just another channel????

13 years ago i think know they've turned mjht also like daily soaps!in every epi someones cries!and now there is a nupur in sajan!

13 years ago i would watch if karan and the others came back and i think so would a lot of others!