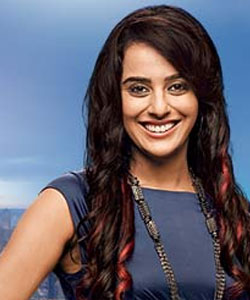 Star One's Dhoondh Legi Manzil Humein has been going through a mellow line with the love track of Alka (Sara Khan) and Chander (Yashwant Singh Thakur) coupled with their lighter moments together. But it is truly said that happy moments last no longer and has to be taken over by something serious.

In the recent promos we saw Aarti voicing against Chander even after being close to Chander and Alka.

Our source says "Aarti, being in the opposition party, very well knows that Chander is  Alka's weak point and could be the strength of her party. Keeping this in mind, she will try to gain sympathy of Chander so that she could convince him to join her party. This will finally instigate Alka to take a stand for her love as well as for the party".

"Till now Alka had been quiet about her joining the party.  But after seeing Aarti's intentions Alka decides to open her mind. And now since she is in love with Chander, she has to protect not just her party, but also fight for her love", adds source.

When contacted, Sara Khan aka Alka Tiwari of the show said "As of now, nothing has been confirmed because Alka  has already conveyed to her father that she is not keen in joining politics".

The show is indeed picking up pace, and we are all set to seeing Alka get into the thick of action when it comes to politics..

Chulbuli_Annu 9 years ago Let's see.. what happen next... chander & alka are in luv & also fight for their parties...

shivani003 9 years ago I just hope that in all this Chander doesnt die like other ppl have been saying. I really love Alka n Chander and even if they wont be together for a while I just wish they dont ruin it by killing him off....

sanjulee 9 years ago i love this show...
now this is becoming interesting day-by-day...

Aanya. 9 years ago I like this show! Atleast it makes sense and has something concrete as a plot! Sara khan is an amazing actress! =)