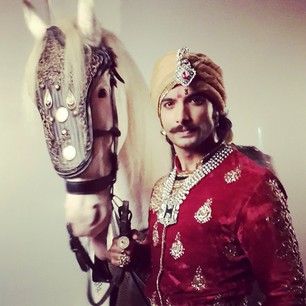 You must have seen the on-screen bonding of Pratap and his horse Chetak but we have heard that now both of them have really become good friends off-screen as well.

We heard from our source that, "Ssharad and his horse Chetak has really become good friends off-screen as well. The horse has started understanding Ssharad's talks too. Ssharad also brings lots of carrots for the horse and feeds him everyday."

We tried contacting Ssharad but he remained busy with his shoots.

DivianTanz_Divz 6 years ago Ssharad Malhotra it's great to see you back on screen again.

swtbaby 6 years ago MP is the best
Sharad malhotra
Rocks

rj_thakur 6 years ago Both are incomplete without each other... I hv full respect for mp and chetak
Bkvpmp rocks !!!!!

Shaina_b 6 years ago One needs to bond with the animals!!!!

I remember Viraf Patel had done the same with his mare Maria in Ek Boond Ishq!!!!

rohinijasrotia 6 years ago We all appreciate ur dedication towards ur work...hope u and the horse will show a real friendship in the show as well

ShaNak_RagNa 6 years ago Ssharad Malhotra All the best...U are improving day by day as MP.

RoshniAN 6 years ago Really excited to see Chetak's entry... Glad to know that Ssharad Malhotra is bonding well with the horse offscreen :)