It so happened that SRK and Farah Khan started chatting about Sony's Entertainment Ke Liye Kuch Bhi Karega at the former's place last Saturday where SRK expressed his love for the show. 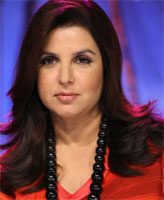 Featured Video
According to our source, "SRK was not very discreet about his feelings. He completely bowled over Farah about how he appreciates all the contestants and their rare talents."

Our source further adds, "Shahrukh also spoke about the one act which stood out. He vividly remembered the Goan guy Wendell who amazed everyone with his fire stunts. He remembered him so well because Wendell had entertained Shahrukh and other members of Yashraj fraternity sometime in the past."

Our source further goes on to say, "SRK also mentioned that the show is a favorite of his kids and that they are completely glued to the channel when the show is on."

The show is indeed promoting unique talent all over the country. Every week viewers are encouraged to participate if they think they got what it takes. Then they are invited to perform in front of a live audience and the judges Farah and Annu Malek. The search goes on from Monday to Thursday out of which eight people are selected. All eight bag 10,000 rupees. On Friday two out of these eight are selected as finalists who then go on to compete for the grand prize of rupees 5 lakhs.

Well, we now know what it takes to please SRK and his family..

13 years ago I'm hooked to this show! It really is entertaining!:)

+ 5
13 years ago Some of the acts presented are really amazing! Like tonight a guy made a peacock out of cloth while spinning around, dancing Bhavai, a folk dance...and a 13 yr old boy who played his synthesizer with his forehead, chin and knees! Its more Circus kind of acts that impress people.

13 years ago alot of ppl like this show i watche da fdw episdoes i odnt like it very much kinda boring. Except the lil girls that did the nagin dance that was cute

+ 5
13 years ago I love the show too! it's very entertaining! it reminds me of America's Got Talent!