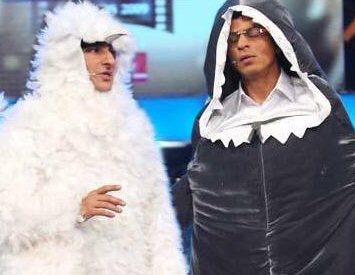 Despite an exhausting night co-hosting the 55th Idea Filmfare Awards with fellow co-star Saif, King Khan decided to squeeze in some tweeting before hitting the sack.

Commenting on the Bollywood beauties that made an appearance, SRK described Vidya Balan as 'ravishing', Deepika 'lovely' and Kat 'awesome' whilst he added that Bebo was missed.

Shah Rukh also handed out thanks to the script team (Kiran Kotria, Veerdas and others) the dancers and the backstage personnel who he admits made everything nice and slick.

Khan rounded of the tweeting session with a note for Shahid Kapoor who performed to Michael Jackson's This Is it who according to SRK, was a 'treat to watch dancing'.


Don't miss the awards as Sony airs them on March 7th.

Surbhi Chandna on user questioning her for liking anti Sidharth ...