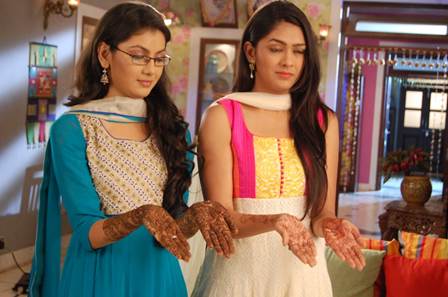 It's been 2 months now since Sriti Jha's show, Zee TV's Kumkum Bhagya, has been launched. And ever since its inception, Sriti's hands have been painted with Mehendi. It all started with the very first episode where her character Pragya's wedding gets called off in the mandap, cut to Pragya attending Suresh's (Faisal Rashid) sister's wedding ... next, we saw her getting engaged to Suresh ... and now she's all set to tie the knot with Rockstar Abhi (Shabbir Ahluwalia) ... One way or the other, Sriti's hands have never been bare.

Talking about her mehendi-laden hands, Sriti said, "It has been almost two months since the show has gone on air, and each time the mehendi in my hand starts wearing out, there is some or the other function in the family due to which I have to re-apply it. While I'm totally up for all things girly, two months of mehendi is a fairly long time! I hope I get to see my bare hands sometime soon."

In the show, viewers are all set for some intense drama that will lead up to the rather unlikely marriage of the flamboyant Rockstar Abhi (Shabir Ahluwalia) and the simple, down-to-earth Pragya (Sriti Jha). The two have crossed paths a number of times and the exchanges have been far from pleasant or cordial ...The two have clearly taken an intense dislike towards each other. At every juncture, they've vowed never to see each other's face again, but little do they realize that destiny has other plans in store for them!

6 years ago Like Sriti Jha in her new serial Kumkum Bhagya!...Continue the good work!!

6 years ago Hope you get all the success you deserve from KB sriti.

wish she sees her hand out of mehendi

6 years ago Shabbir Ahluwalia and Sriti Jha rock as Abhi and Pragya. Waiting to see more of their interactions.

6 years ago Yeah since this is like the 5th Shadi in the seriel.
Its true
Shabbir and Sriti jha have great chemestry
YEEY to us Finally AbhiGya is happening

6 years ago Sriti and shabbir have great chemistry on screen and off screen, love kumkum bagya and AbhiGya :)

6 years ago Lol I've noticed that too. She's had mehendi on her hands for long now.

6 years ago she must have been fed off mehindi now
shabbir ahluwalia, Sriti jha doing a great job