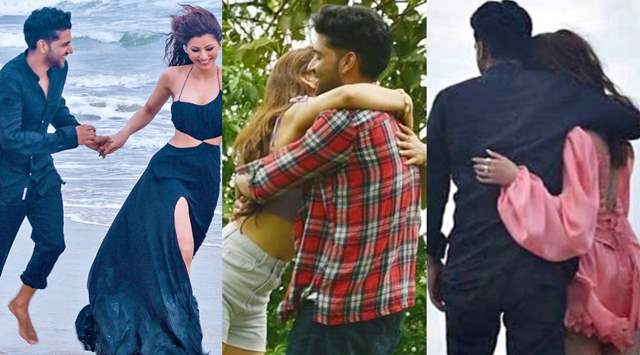 Urvashi Rautela and Guru Randhawa have been teasing their fans with some mesmerizing and cozy photos of them together. The duo has been playing a fun game with their followers by putting up funky captions with their photos together. This method of communicating has left the poor fans confused as to what is happening? No one knows whats in store!

Recently, Guru Randhawa and Urvashi Rautela posted the identical pictures on their respective Instagram, but both of their captions seemed odd. Punjab’s most popular singer captioned the picture as “Hass toh rahe hai par joke kya tha [email protected] (Black and Red Heart Emoji) 🖤❤️” and Urvashi Rautela captioned the picture as “Pata nahi kuch Punjabi mein tha @gururandhawa (Black Hearts Emoji) 🖤♥️” and after studying the caption it was figured out that both are communicating with each other through captions, what a smart way of talking!

Also, this has to be the most romantic way possible.

On the work front, the actress was last seen in the 2020 hit “Virgin Bhanupriya” and before that in “Pagalpanti”, where she shared screen space with actors like Anil Kapoor, John Abraham, Ileana D’crus, and many more. She has also done some praiseworthy acting in films like “Singh Saab the Great” that was her debut and then “Mr. Airavata”, “Sanam Re”, and a few more.

Her journey with music albums too has worked in her favor as this year she has delivered some hits like “Ek Ladki Bheegi Bhaagi Si”, “Teri Load Ve”, and few more are yet to be released.

Talking about her current projects, Urvashi will be seen in 2021’s most awaited cop-action-thriller web series “Inspector Avinash” produced by Jio Studios, which will cast her along with Randeep Hooda.

Then  she is going to play the role of a microbiologist and an IITian in her big-budget sci-fi Tamil debut, talking about the south debut the actress will also be seen in “Black Rose” a bilingual thriller, and the Hindi remake of “Thirutu Payale 2”.

The actress is all excited for her international music collaboration “Versace” with the Egyptian superstar Mohamed Ramadan.