Mumbai, Sep 16 (IANS) She's so far been seen singing and gyrating to remix versions of evergreen hits. But now VJ-turned-actress Sophie is changing plumes. Her new ready-for-release album has absolutely original tracks - no remixes at all!

'I got into the remix thing because my music company T-Series saw it as viable. Now I'm back to my original roots,' Sophie told IANS.

She is also trying to make a movie career for herself and doing quite well. Overnight she replaced Mandira Bedi in Sanjay Gupta's 'Alibaug'.

'It was almost overnight,' Sophie chuckled. 'I landed from abroad in the morning. And by evening the role was mine.'

Last year she was a part of 'Pyaar Ke Side Effects'.

'This year there are more movies. I'll be seen in Anant Mahadevan's 'Aggar', Vikram Bhatt's 'Speed' and, of course, Sanjay Gupta's 'Alibaug'. I've known Gupta for many years now. He has watched me grow in my career through the various things that I've done.

'In 'Alibaug' I play a character called Nisha, a very strong, independent woman... quite the way I am in real life. Being a VJ and singer I can bring a lot of camera-friendliness to my character.'

Singing and acting were all Sophie wanted to do.

'Veejaying just happened. The entertainment industry was very kind to me. I've no complaints. I always wanted to be an actress. I came from London and my mother moved to Mumbai with me. If it wasn't for my family I wouldn't have been able to do it.

'I could never go from one producer's office to another. That's why I became a VJ. People got to know me. But they also had a problem taking me seriously as an actress. Now hopefully they will.'

Ironically, she played a wanna-shine remix artiste in 'Pyaar Ke Side Effects'. A role she has outgrown.

'That was quite like me - a girl who could laugh at herself and danceg in her skimpy clothes. I enjoyed singing and dancing to my remixes. People forget I started with an original song 'Yeh dil sun raha hai' in 2000 for Biddu when I was part of a girl band called Sansara. That was seven years ago... Oh my god! Do I see a grey hair?' she joked. 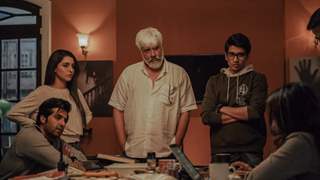