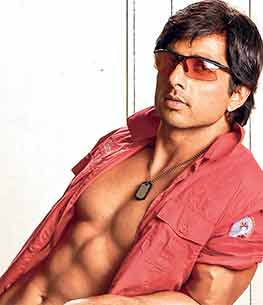 Sonu Sood flaunts a perfect set of abs and has been making sure that he keeps everyone on the sets of "Happy New Year" fit too.

Sonu is confident that after the next schedule of the film, there will be visible changes in the way everyone looks.

"Everyone is following a fitness regime. For the last schedule, I was absent for 10 days and everyone told me that they gained two to three kg in that period. When we were shooting, everyone used to have salads and junk food was not allowed on the set," the 41-year-old said here Monday at the unveiling of the cover of Health and Nutrition magazine featuring him.

"I remember I hid Shah Rukh's chocolates in Dubai and he was hunting for them and he knew that I must have hid them. So when you have everyone who wants to be fit, they are on their toes. We still have a long schedule of 80-90 days and I think after 90 days, you will see a huge change in everyone," he added.

Sonu was last seen in "R...Rajkumar" in a negative role.

"Happy New Year" is being directed by Farah Khan.