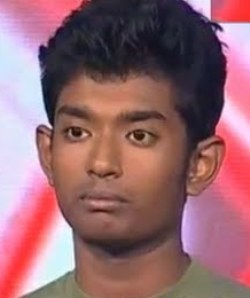 The promos are already on air which shows that Pritam Chakraborty will step into Sonu's shoes for a few episodes of Sony TV's X Factor India. Since Sonu is busy completing his prior commitments, Pritam has now taken Sonu's responsibility to join hands with Shreya Ghoshal and Sanjay Leela Bhansali.

A source informs, "The elimination episode was shot yesterday where Shovon Ganguly and Sahiti, both the contestants from Sonu's team were sent to bottom two due to less number of votes. Hence the final tiff took place between two contestants from the same team."

"Though Sahiti had  a problem in getting her sur right initially, she had a smooth run once she started her performance which kept the audience connected. Shovon who went well with his performance, seemed to be unlucky as he could not match the performance given by Sahiti and had to bid adieu to the stage," adds source.

"Three of the judges voted out Shovon and everyone stood by Sahiti and saved her to stay back in the competition, "signs off source.

With this, Shreya and Sonu have lost one contestant each from their teams, while Sanjay maintains a cent percent record till now...

Thaathi 9 years ago Oh No ! I Loved Shovon. He Rocked. His Voice Is Brilliant. i Wish Him All The Very Best. May God Bless Him.

suresh555 9 years ago I knew Sanjay was going to vote for Sahiti. The guy only connects to female singers

nafeesaeed 9 years ago its not fair...he should not go now.i like his singing...ok wild card main try krna m with u...

yipee 9 years ago i think the article is incorrect...pritam voted for shovon...sad he got eliminated...there r many others who deserve to go before shovon

crazy4tereliye 9 years ago he was soo good man!!!! he shouldnt have gone!

Rasny 9 years ago Oh..Sorry for him and I think public should vote for real talent rather than voting for their own city/state.

nuttycleo 9 years ago Shovon lost to Sahiti??this is getting weirder, man!