Stylish actress Sonam Kapoor is fearful of being called a fashion icon for the youth as she feels the tag comes with a lot of responsibilities. 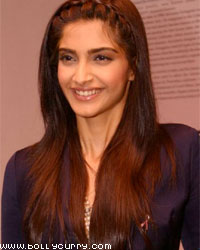 "It's only been four years since I have been in the industry, and if in such a short time someone calls you iconic, it is scary and overwhelming," the 26-year-old actress said at a derby event here.

However, she feels it is more important to prove herself as a good citizen first.

"As long as I am a responsible adult and I am responsible as a youth or a style icon, and I don't take myself very seriously that 'Oh! I am so amazing', but be a responsible citizen and a good Indian, that is the most important thing," said Sonam.

Sonam turned up at the derby event clad in a coral red sari and donning silver jewellery. While most women doll up in dresses and a hat at a derby, Sonam decided to go unconventional.

"Everyone wears a predictable dress and hat and comes to the derby. I said why don't I do it the old Indian style where they used to wear cotton and chiffon saris. That's why I wore silver and coral," said the actress, who was recently seen in "Players".