View Profile
While shooting for her upcoming comedy film Thank You, Sonam has found one sure reason to not be so thankful after all - apparently, the pretty lady has contracted typhoid, whilst on sets. 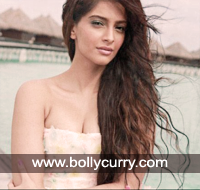 And she may have had little idea about the severity of her case, if she had not returned to India transiently for the shooting of an ad commercial, when a medical check up actually indicated typhoid. It sure has worried her parents, who have forbidden Sonam from heavy duty action until she recovers - including postponement of her shooting schedules.
Sonam being Sonam did manage to go ahead with the ad commercial's completion at least - not wanting to procrastinate work for others on her account. And the only reason daddy Anil relented was because the commercial required easy shots.

It still delays her other projects, including Thank You.

We wish our dear masakali girl a speedy recovery, and a well revived comeback!
12 Likes

Mandana Karimi and Radhika Apte come out in support of ...
57 minutes ago