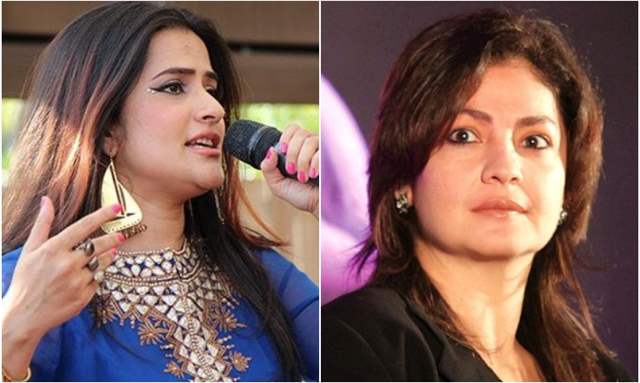 Mahesh Bhatt’s daughter and filmmaker Pooja Bhatt stirred up headlines ever since she came on record to defend the allegations made against her family for supporting Nepotism in Bollywood.

On Wednesday, Pooja asserted that the Bhatts have always launched new talents and she also mentioned that actress Kangana Ranaut was launched by Bhatt productions in her debut film Gangster. And in no time, Kangana’s team had responded with a sharp reply. This had led to a Twitter brawl between the two ladies on social media.

In her tweets, Pooja had also mentioned how her upcoming film with sister Alia Bhatt will launch a new music talent. “Even #Sadak2 gives birth to a brand new talent in the form of @Suniljeet72 A music teacher from Chandigarh who came to our office with no prior appointment,a dream,a harmonium & a brilliant song called ‘Ishq Kamaal’ that was absorbed into the film on first hearing by my father” she had tweeted.

Reacting to her tweet, singer Sona Mohapatra has shared a few suggestions and stated that the new talent should also get the benefits of the music’s success. Sona wrote on Twitter, “That is so nice Pooja.Your banner has been known to spot new talent for sure. Would mean so much more if these musicians had a stake in their music’s success? Everyone just ends up doing the favour of the ‘opportunity’ & this is an endless cycle in #Bollywood. Zero concept of IP.”

She added in another tweet, “& not that I blame you or Vishvesh films. It is a systemic problem in our industry & country; ‘exploit or be exploited’. That music labels in India don’t have an A&R in place that discover, nurture and promote artists - the heart of modern music business is the biggest tragedy.”

Sona responded to Pooja Bhatt’s tweet by saying that benefitting from the work of new talents in return of a chance given to them is a wrong practice. “Having said that @PoojaB1972, might be a time to reflect on creating a healthier, creative eco-system instead of just being defensive? This mindset of-“We provide you the chance, so we will make all the money out of your work” for creators of music is truly exploitative & wrong” wrote the singer.

Sona made a suggestion as she tweeted: “& if your banner launches,promotes talent,helps reach a wider audience,it is perfectly right for such artists to be signed to pay u a percentage of their earnings.Thing is most composers,writers don’t from shows.Only singers do.Music dies when it’s source most compromised. #India.”

shakethebiscuit 1 months ago well said, if its the talent and then you are not doing any favours. its all about making money at the end.

"Rhea is Being Subjected to a Bizarre & Dangerous Media ...
51 minutes ago