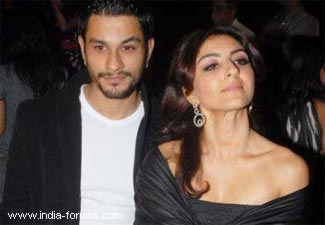 Actress Soha Ali Khan, who has guarded her relationship with Kunal Khemu well so far, made a candid confession by saying that she feels reluctant to accept her mistakes, and say 'sorry', while Kunal feels possessiveness in every relationship is important.

"I am very proud and find it extremely difficult to say the word 'sorry'. I usually end up arguing a lot in the bargain," Soha said while playing peacemaker between a couple for an upcoming episode of UTV Stars' "Superstar Santa".

"In fact, in our relationship, I have said the least number of 'sorries' as compared to Kunal. But it's something I'm working on...I'm learning to say 'sorry' more often to Kunal," she added.

To which Kunal, who was present on the show too, said: "Aha...finally you admit! And this time on national television."

The duo, who has featured in films like "99" and "Dhoondte Reh Jaoge", has dodged the cameras for a long time, but this will be one of their rare appearances together on the small screen.

Kunal feels to sustain any relationship, it is important to be possessive about each other.

While hearing out the woes of the female on the show, he told her: "If you aren't possessive at all about your lover, then there is reason to be worried. It just goes to show that you don't really care."

"Superstar Santa", which deals with issues relating to friends, families and romantic relationships, features celebrities solving the issue at hand.