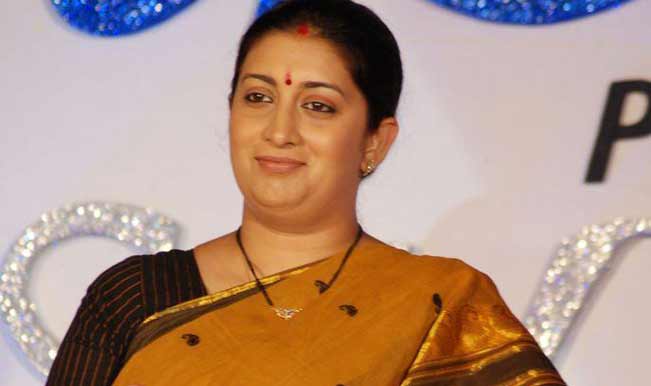 Veteran television actress Smriti Zubin Irani is climbing the ladder of success with her newly assigned job of the Cabinet Minister. Smriti who became a popular household name as Tulsi in Star Plus' Kyunki Saas Bhi Kabhi Bahu Thi has set a benchmark for the actors of the industry.

After earning the recognition in Television industry, she has taken a step forward to be a part of the Film industry and will soon be seen in the film titled as All Is Well.

As Smriti is handling the portfolio of Human Resources and Development but now the minister will shine on the silver screen in the film. Though she will be juggling between her work however, things are looking comfortable as Smriti was approached for the film way before she was sworn in as the minister. Being loyal and punctual about her commitments Smriti is shooting for the film now.

We got in touch with the director of the film Umesh Shukla to know more about Smriti's character and he said, "Yes Smritiji is doing the film All Is Well. She is playing the character of a mother and I feel that she is perfect for the role. She is a very talented and a professional person. As she has become the cabinet minister of the country her responsibilities have increased but as she gave me the commitment before becoming a minister, she is managing both very efficiently."

He further adds, "We are shooting from past 80 days. She will be seen as the mother of Abhishek Bachchan and will be paired opposite veteran actor Rishi Kapoor who will be her husband in the film. Right now I can't reveal much about her character and about the story because it's too early to speak about it."

samicute 6 years ago I still wonder how did Smriti managed to do a film in the middle of election campaign .

Joshua_TANHA 6 years ago I still wonder how did Smriti managed to do a film in the middle of election campaign ...