View Profile
Smriti Kalra, who debuts with Zee TV's '12/24..Karol Bagh' has no qualms about giving up her RJing for the small screen. If anything she is only excited that her well-known voice will also have a face too! 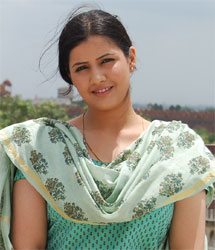 Featured Video
Smriti says, "As an RJ you are high on life. You go- hey people and blah blah. You're adrenaline is several notches higher than the normal people. So yes, I did think if jumping over to the field of acting is really suitable for me. But then, I thought people only recognize my face and with television as the medium, people will also get to recognize my face. So why not?"

Smriti further adds, "To be successful in your career you need hard work, aptitude and attitude. I am putting in a lot of hard work. My aptitude is developing. And attitude I think  I have the needed amount. So I'm really not worried about acting as a career. As long as it goes on well, I'm here to stay."

The debutant has joined the field of acting against the advice of one and all. "According to my father, media is a fake world. And all my family members told me not to take up the offer because according to them I'm too intelligent to be an actor," she says between peals of laughter.

Smriti plays the role of Simi Sethi in 12/24 Karol Bagh. She is the eldest of the three daughters, and is at the receiving end of a lot of rejection when it comes to marriage proposals.

To find why? Catch Karol Bagh which launches tonight on Zee TV at 10 pm.

12 years ago After watching your show I have become your die hard fan. None of the TV actress have impressed me so much as u.U are too good u appear as real and not fake like most actors.Really going ti miss u ,hope to see u soon in new tv show.

13 years ago Wasn't it on today in India??? Where are the Vids and the section for this show???

+ 6
13 years ago Isnt she the one who asks,"Is it ok to marry a younger guy?"Well, I am personally waiting for this serial.

+ 8
13 years ago Waiting for the first episode to air, i'm excited about what they will show about Delhi.