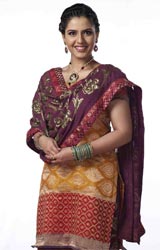 Smiriti Kalra, Simmi of 12/24 Zee's Karol Bagh had a tough time this week. Smiriti packed up from her shoot and reached her house in great hurry as she had to take a flight to Mumbai to participate in Zee Rishtey Awards 2010. Smiriti's performance was on the next day and she was to reach Mumbai for her technical rehearsals.

When Smiriti reached home she found the house locked and her brother had left for work with the keys. Poor Smiriti couldn't think of a solution as she had a flight to catch in an hour's time.

Smiriti rushed to the airport without anything but her cell phone. She called her friends for help and borrowed money from them on her way. When she reached Mumbai without any luggage, she had to head directly to the venue in the same avatar. She later went berserk shopping.

An excited Smiriti says, "I felt horrible when I realized I had to go to Mumbai only with the clothes I was wearing and my cell phone. Thankfully my friends came ahead with help and I love them for that. I had to address a PC, meet my friends in Mumbai and also attend the event next day. I just left for shopping after my rehearsals and went crazy. I have shopped enough for the next six months."

Happy that Smiriti got it all sorted!

12 years ago Smiriti u are the best actress on tv.The expression on your face the way u convey emotion through your eyes too good.I LOVE to see u in karol bagh.

12 years ago Good performance from Smriti yet again.

Liked the way Simi is asleep on Abhi's shoulder. Looked cute as a couple. Thats how couples are in tiring times.
Looked like Simi was really asleep.
Liked how Simi is taking permission from Abhi and requesting him if they can go to 12/24. Good she remembers it hurts Abhi about her and his own beizzati.
Liked her smile on seeing Neetu but the quick recovery to tell her i dont want to listen to faltoo talk.
Liked the way Simi was ready to confront her neighbors... just that Manju stopped her....but there is that strength to fight it all when they are talking rubbish about her and Abhi.
Liked the confidence to break the lock when she hears about being on rental basis in 12/24. No prestige lost if rent is paid and she can be close to her dad.

12 years ago Smriti,
Excellent emoting in yesterday's episode.
Good luck to you dear and god bless you

skk5 12 years ago An excellent actress. She has raised the bar of acting to such high level, which would be difficult to surpass. She is so natural, so good.........superb

12 years ago Smriti as simi has done a good job today. keep it up

12 years ago She looks so sweet and cute.And her acting is very good.

+ 3
12 years ago Love you Smriti, you are a lovely girl! And shopping is always a great thing!

12 years ago ok that was an immediate thinking. but dosent she have a duplicate key of her house !!!! surprising .and dosent she carry a purse with her.I thought thats what every one does.