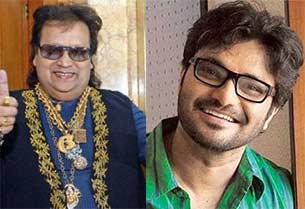 Musicians-turned-politicians in West Bengal, who have been crooning their way to glory and entertaining people, are now using their creations to drum up support for their election campaigns.

Campaigning in the state is getting a new dimension with as many as four singers/musicians in the fray for the Lok Sabha polls.

If Bharatiya Janata Party (BJP) candidates "Disco King" Bappi Lahiri and singer Babul Supriyo are belting out their hit Bollywood numbers, Trinamool Congress candidates singer Soumitra Roy of the Bengali band "Bhoomi" and Rabindra Sangeet singer Indranil Sen are harping on the son of the soil image to reach out to voters with their Bengali tracks.

The famed composer, credited with having synthesised disco music in Bollywood, is also working on developing a few songs to promote both his party and himself.

"Music is my soul and naturally my campaign has to be musical," said Lahiri, who ruled the charts in the 1980s and 1990s giving tunes to mega hit films like "Disco Dancer", "Namak Halaal", "Dance Dance", "Commando", and "Sharabi" among others.

It's not surprising that hits like "Dil Ne Dil Ko Pukara", "Pari Pari Hai Ek Pari", "Hum Tum" and "Chanda Chamke" have been reverberating from all nooks and corners of Asansol where Supriyo, the voice behind the mega hits, is in the fray.

Supriyo, who wants to pay back his admirers by working for their welfare, has been humming all his memorable songs in Hindi and Bengali as he canvasses for votes.

Pitted against Congress strongman Adhir Ranjan Chowdhury, Sen's electoral fight from the Baharampur constituency is being dubbed as "Gaan (Bengali for song) versus Gun".

"It's easier to reach out to the people through music than to deliver hate speeches and talk ugly about the rivals," said Sen, who holds the Guinness World Record for singing the maximum number of title songs, 213, for television serials.

Much like his songs which enshrine the connect with the earth, Roy has tweaked a few of his unforgettable songs to impress the voters in Malda North constituency.