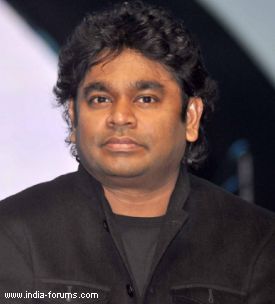 He has sung in his mother-tongue Tamil as well as Hindi and now composer A.R. Rahman has crooned his first Punjabi number "Maahi Ve" for Imtiaz Ali's "Highway". He said it was easier than Hindi.

"First of all, I am singing in Punjabi, nobody complimented me," the Oscar winning composer told reporters at an event here.

He is known for going behind the mike for Tamil hits such as "Oruvan Oruvan" ("Muthu"), "Sandakkozhi" ("Aaytha Ezhuthu") and "Athiradee" from ("Sivaji"). In Hindi, he has sung hit numbers "Hamma Hammma" and "Khwaja mere khwaja".

When asked how did he pick up the language, Rahman said: "I am a fan of the language, I have been listening to Nusrat (Fateh Ali Khan) saab's songs for the past 25 years. So, it was just affection for the language. Then, of course, working with Subhash Ghai and (late) Yash Chopra jee (helped). It was easier than Hindi," he added.