Mumbai, Sep 27 (IANS) Bollywood playback legend Lata Mangeshkar turns 81 Tuesday, with fans swearing by her golden voice even as she has chosen to cut down on assignments after singing for over 1,000 Hindi movies. 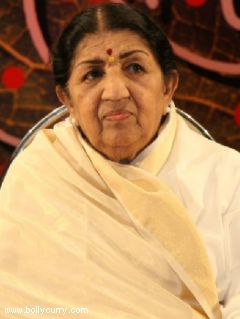 Starting her career in 1942, she reigned over the film industry for decades and is still the first preference of many filmmakers like Sanjay Leela Bhansali and Madhur Bhandarkar and an inspiration to established singers of today.

Lata, who was born Sep 28, 1929, also featured in the Guinness World Records book from 1974 to 1991 for having made the most recordings in the world. She was last heard in Bhandarkar's 'Jail'.

'Lataji's birthday is a great event. She has given us so much in terms of music, love and affection. I just hope that she lives on forever and gives her blessings to us. I am very close to her and I am happy, proud and fortunate that she is close to me,' said filmmaker Yash Chopra who has vowed only to work with her among the female singers in the industry.

Bhansali is in fact composing an album as a tribute to her.

'I know every nuance in her voice. She is a miracle of nature. And there's so much in her throat that is still untapped. I first thought I'd create just one song for her in 'Guzaarish'. Then I thought, why one song when a whole ethos, era after era of supreme excellence is embodied in that voice?' Bhansali told IANS.

'Lataji is far more than a singer. She mirrors all the beauty of the soul. It is that beauty that I want to capture in my songs,' he added.

Not just this, Bhansali's forthcoming film 'Guzaarish' is also inspired by one of Lata's imperishable melodies, 'Hai tere saath meri wafaa mein nahin to kya', composed by Madan Mohan and written by Kaifi Azmi for the film 'Hindustan Ki Kasam'.

Starting her career in 1942 with songs in Marathi, Lata's first Hindi song was 'Paa lagoon kar jori' for Vasant Joglekar's movie 'Aap Ki Seva Mein' in 1946. Two years later, composer Ghulam Haider gave Lata her first major break with the song 'Dil mera toda' in 'Majboor' and after that there was no looking back for the nightingale of India, as she is fondly called.

She has worked with all the major composers of the bygone era and mesmerised the current lot too.

Lata has recorded songs for over 1,000 Bollywood movies and sung in more than 36 regional Indian languages. She is the second vocalist ever to have received the Bharat Ratna, India's highest civilian honour.

Lilting melodies like 'Aayega aanewala' from 'Mahal', 'Aaja re pardesi' from 'Madhumati', 'Pyar kiya to darna kya' from 'Mughal-e-Azam' and 'Satyam shivam sundaram' from the film of the same name still find a place on the favourite list of music lovers.

Even singers are still in awe of the great singer who is also the elder sister of singer Asha Bhosle.

'I can't express in words what she means to me and how I feel for her. Just want to wish her a happy and healthy life ahead,' Sunidhi Chauhan told IANS.

Playback singer Sonu Niigaam added: 'I want to wish a very happy birthday to Lataji. Many many best wishes to her. I would just like to tell her that keep enlightening India and world with your songs and bless me.'