View Profile
If you've ever believed affairs in tinsel town are 'territorial' - cricketing sensation Yuvraj Singh gives you much history and reason to review the belief!

Previously having been in a relationship with actress Kim Sharma (of Mohabbatein fame), and allegedly having involved with the likes of Deepika Padukone, Ameesha Patel, and Neha Dhupia, at different points of time - Yuvraj adds another name to his scandalously long 'lady-list'! 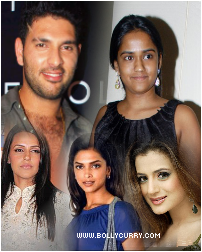 This time, sources are linking this star of World Cup '11 victory, to none other than Salman Khan's younger sister, Arpita! Apparently, smoke is rising from the two being spotted at a South Delhi five-star joint on Sunday, where their attendance was marked by many, for quite some time too. Interestingly, sources assure that the two had no company other than each other.

Yuvraj, who does accept to being 'good friends' of a few years now with Arpita, has vehemntly denied not just rumors of budding romance, but even being present at the venue in mention, a Chanakyapuri club on the said day. Yuvraj has rubbished all gossip rife in the wake of this 'claimed spotting', dismissing even an 'iota of truth' in the matter.

While we want to believe Singh's blatant denial, if past experience is anything to go by - not to mention his reputation in such matters - 'good friends' is possibly the most trite and abused facade for blooming love!

Deepika Padukone mobbed by fans; looks troubled as a women tries to ...