View Profile
It is not everyday that a man like Fawad Afzal Khan walks in to your life and a rarity that this blessing gets showered upon you for a month's duration and a bit more! Imagine the palpitations your heart endures and the pleasure your eyes can't seem to contain. Putting us all through such a volatile predicament, Mr. Khan seemingly enjoyed the effect he had on the fainting female population around the globe. Coming down to India for the promotions of his Bollywood debut, Khoobsurat(2014), a name surprisingly quite synonymous to him, this Pakistani actor cum singer had Ms. Bolly Chili falling to his feet as well. Co-starring the fashionista Sonam Kapoor herself, Fawad Khan didn't just steal the showstopper tag from her through their endless appearances but was just too much a temptation to ignore.

Caution: It might get a little too hot for you to handle, and yes, Ms. Bolly Chili is completely under the spell of this prince. 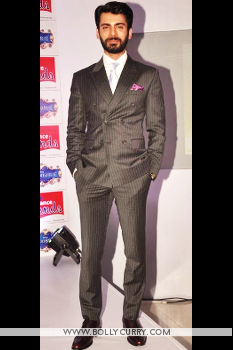 Starting from the most recent, Fawad Khan and Sonam Kapoor attended a special screening of their film for the Make a Wish Foundation for Kids, a wrap up as well for the hard work they had put in bringing Khoobsurat to people. Draped in a double breasted grey pinstripe suit by designer Akshata Bhojania, crisp white shirt, Thomas Pink tie, printed Montblanc pocket square and Canali shoes, Khan was a sinister corporate dream come to live and how! The debonair charm, oozing urbanity and with those polished manners, there is no way I could review this with open eyes and not get hypnotized. BollyCurry Rating: 5/5 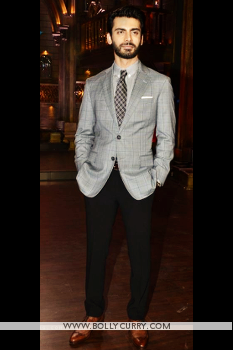 If the dazzling light had ended there, I would have been in a safe zone. Mr. Khan however, seemed to have pre-planned a catastrophe. Making some more places holy by his presence, Khan accompanied his co-star to a reality show set, dressed in a checkered blazer from Brooks Brothers, in the color grey again, paired up with a French Connection shirt and Akshata Bhojania pants. Black printed tie, white pocket square and brown Canali shoes finished out his look. The ease, such confidence; this desi 'Mr. Grey' seemed more sinful than any. BollyCurry Rating: 5/5 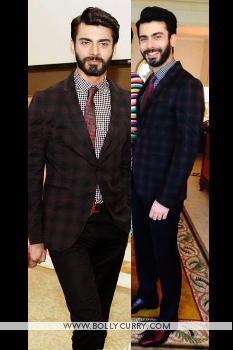 A noted, much appreciated and championed quirk of Mr. Khan rests in the fact that he indulges in more formal ensembles, something men today seem not so in touch with. I caught him yet again in his favored styling at the Dubai promotions of his film. Opting for a dark checkered Sisley blazer, paired with a checkered print Burberry shirt, maroon colored Louis Philippe tie, Akshata Bhojania trousers and Gucci shoes, Khan looked dapper and smouldering enough to bring many a summers. This miracle of a man who recognizes the weaved finery, oh! How deprived I had been for so long! BollyCurry Rating: 5/5 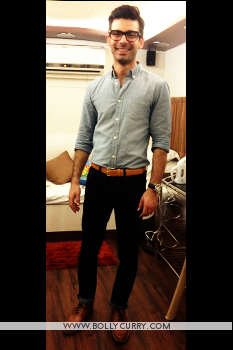 For someone who is in touch with his inner gorgeousness so aptly, I am making no jokes when I say that Fawad Khan can make a sack look savory. He unfortunately didn't take us up on that pledge but through the promotions, he did change things a bit. From formal to casual, the transitions were few but those few were enough to give us all sleepless nights. Making his presence felt on the chat show Captain Tiao, Khan opted for a polka dotted grey Benetton shirt paired with Zara denims and brown Canali shoes. A pair of geeky Tom Ford glasses and gel styled hair gave him a smooth finishing look. Dressed like a carefree young Italiano, Khan was a delicacy, everyone was eyeing for. BollyCurry Rating: 5/5 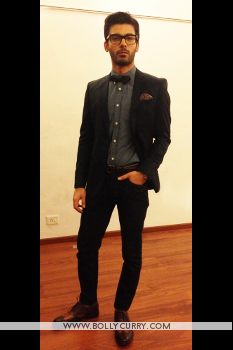 Mixing things up a little bit for an interview, Fawad Khan opted for a more savvy formal look. Borderline between an eccentric artistic part-timing a fashion model, Khan opted for a polka dotted Marks and Spencer shirt with Zara jeans, and a Raghavendra Rathore jacket with a pocket square. Brooks Brothers belt, Tommy Hilfiger shoes, Tom Ford glasses, Mont Blanc watch and Louis Philippe bow added the finishing touches. This was one appearance of Khan that was less known about, due to the lack of pictures - something I am highly indebted towards or the mayhem created by the female populace would have been a concern for national security all around the world. That sums up how in beyond love I am with him here! BollyCurry Rating: 5/5 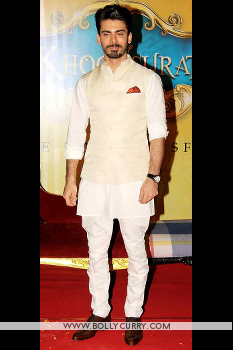 Fawad Khan had kick started the promotions of Khoobsurat on a fashion regal note and since then I surely should have taken the hint to be fore warned. Getting on stage during the trailer launch of his debut movie, Khan had chosen an in-character look of a royal prince. Dressed a in a Raghavendra Rathore ensemble of white kurta and pajama paired with a golden bandgala and a maroon pocket square, Khan was the quintessential Disney prince and kept that going throughout. I will just beg all to let us know; where can I order this demigod! BollyCurry Rating: 5/5

However much I want to try and contain the flawlessness of this multifaceted male specimen, the creative limitations bring us towards the end of our bucket full of drool list. I will always be thankful to Mr. Khan for his indulgence in his looks and creating a havoc wherever he went. A refreshing change to see a Bollywood actor so impeccably put together, without looking like a fish out of water. Fawad Khan owned all his looks and was a delight in all his appearances, standing tall above all critics and cribbers. Rest for the mortal we, he had us mesmerized in ways all known to only him. And if you did notice our ratings, just put it down to the fact; I am a mortal. Until I get anti-jinxed from the Fawad fever, let us know what you thought about him and his sightings in the comment box below.