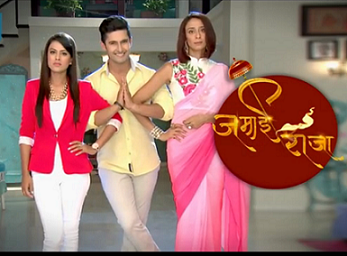 Zee TV's popular show Jamai Raja is succeeding in grabbing the eyeballs of the viewers in a very short span of time. The show is been appreciated and loved because of its interesting storyline and performance of the actors.

As per the ongoing track Roshni (Nia Sharma) and Siddharth's marriage ceremonies are in full swing and Durga Devi (Achint Kaur) is trying all possible ways to stop her daughter Roshni's wedding.

According to the sources, "In the upcoming episodes, Durga Devi will be seen plotting another new plan and will create a hindrance in their marriage. A sangeet ceremony of Roshni and Siddhart will be taking place for which all will be seen grooving and celebrating their happiness. In the meantime Durga Devi will plan another way to interfere in the function."

"Durga Devi will set ablaze the hall where the sangeet ceremony is being celebrated but unknowingly Roshni will get stuck in that fire," adds the source.

"Later Siddharth will save Roshni which will destroy DD's evil plan," ends our source.

Will Roshni come to know about DD's real face? What will be DD's next move?

Keep reading this space for latest updates on your show.

6 years ago jamai raja is awesome show, and nia sharma u just rocking as roshini

6 years ago Nia Sharma u r the best...keep rocking...love u baby doll