COLORS' Na Aana Is Des Laado is gearing up for a major twist with the unfortunate death of the maid servant Gunja. 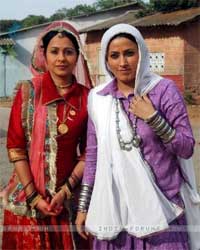 The coming episodes will focus on Gajendra trying to rape Gunja, and this is when in the struggle that happens, Gajendra accidentally shoots Gunja which leads to her death.

A little birdie tells us that, "Someone from the family will also be witness to the murder. This is where Sia (Natasha Sharma) who has always been fighting for the cause of women gets back to her aggressive best, and will try her best to provide justice to Gunja's family".

The track will now be similar to the track in the movie Damini. While Ammaji (Meghna Malik) will try to manipulate the judicial system using her influence to save her rapist son, Sia will not leave any stone unturned in putting Gajendra behind bars.

Our source further informs us that, "Sia will be forced to take a drastic decision of choosing justice over her relationships. She will challenge Ammaji, who thinks that with power she can buy justice. In all this, there is also a possibility of Sia's relationship with Raghav (Aditya Redij) getting strained.

When contacted, Natasha Sharma told TellyBuzz, "Laado is now coming back to the main flavour of fighting against injustice that happens to women. And the viewers will once again see Sia at her revolting best. After marriage, Sia had focussed on her relationships and had got docile. But now the situation demands Sia to fight for justice, and this is what she will exactly do".

Meghna Malik aka Ammaji told us, "I have not checked the screenplays of the future episodes. But all I can say is that Ammaji will be forced to accept yet another challenge".

It will be interesting to see whether anyone in the family will side Sia in this fight..

3 years ago It is a good movie and the best and most important part of the movie was Chitrangada's acting.

+ 2
8 years ago Darling Aditya...Best Thought:"the person who luv u most will trouble n irritate u the maximum,bt whn u drop a tear,he will fight wid the world to stop ur tears."gud mrng
Hurt me,
tease me,
make me cry,
bt in the end of my life,
when i will die plz ATLEAST,
reamember me and say stupied
I MISS U
come back.soonnn Lots of LOVE... Barenya...

das_mits 10 years ago Sia won t be able 2 do anything.She is very week.In fact Raghav is even more week,and not so trustworthy as well .

10 years ago The whole incident was classic Laado tragedy, the TRPs thrive on one moral/emotional turmoil after another. I do love this show but honestly they never let the 'good times' last for longer than one episode. The dark clouds of injustice are always hanging over them. Until now i feel Amba brought the most positive change in Ammaji. Even Sia's mission to get Raghav as her strength against Amaaji has not been realised fully yet as they were still developing the love and trust between them. Hope this track fulfils that and this time Sia actually wins a battle against Ammaji.

10 years ago I don't think she can do anything..
Amba is the only one who can defeat Ammaji...that's it!